Lars Klingbeil, general secretary of the Social Democratic Party, called for the AfD, the second most popular party in Germany – which holds hardline anti-Muslim migration views – to be placed under surveillance by the German domestic intelligence agency, after one gunman (not affiliated with AfD) killed 10 people at Hookah bars, mostly with Muslim immigrant backgrounds. 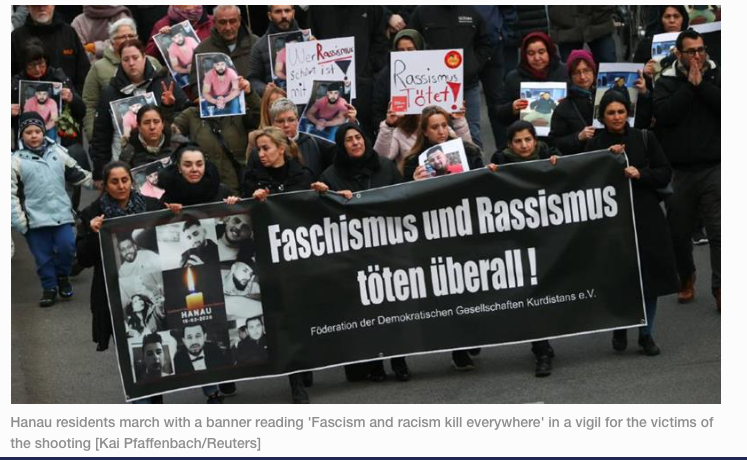 Al-Jazeera  Thursday’s attack in the small western city of Hanau has deepened fears in Germany that Muslim communities are vulnerable to fascist and “Islamophobic” violence.

Tobias Rethjen, the 43-year-old killer from Hanau, posted a number of far-right conspiracy videos on YouTube, as well as publishing a lengthy manifesto on social media, in which he espoused racist and eugenicist views, Germany’s federal prosecutor said. Rathgen burst into a Hookah bar in the central area of Haumarkt, gunning down at least three people before driving to the west of the city and killing five more at another Hookah bar and a small shop nearby. He then returned to his apartment, shooting dead his 72-year-old mother and then himself.

Last week, police arrested 12 neo-Nazis across several German states, believed to have been part of a cell coordinating attacks against multiple mosques. (None of which have any connection to AfD)

Have Germans reached their breaking point?

HEY, GERMANY…Keep flooding your country with ungrateful Muslim invaders, then act all surprised when there is a backlash