Or so says Mahmoud Abbas, leader of the Fatah terrorism purveyors of the Palestinian Authority at the UN Security Council, on Feb. 11, 2020.

As Fatah marched with knives, rifles, and suicide belts at a rally in Ramallah in January 2020, celebrating its anniversary and first terror attack against Israel in 1965, Abbas tells the world: “We have worked to spread a culture of peace among our people, among all the Palestinians. We say to them: “Only peace. We do not want war. We do not want violence. We do not want terror.” We fight violence and terror throughout the world…”

Abbas says: “Our struggle is not against the Jews, but against those who occupy our land… We will never turn to violence and terror, no matter how we are attacked. … We believe in peace and believe in fighting violence. We will fight through peaceful popular resistance.”

And in one of his biggest lies, Abbas claims that they recognized the state of Israel back in 1993. 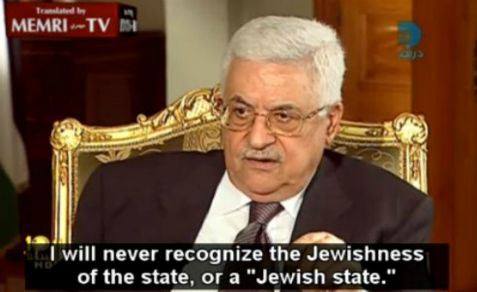