Georgetown University’s religion panel on the COVID-19 China virus ignored the effects of the outbreak on the Easter observance, instead focused on how it is affecting Muslims and the Islamic holiday of Ramadan.

The College Fix A Georgetown University panel event hosted by its religion center on Monday about the religious response to the coronavirus pandemic did not delve into how billions of Christians across the globe will not be able to celebrate Easter together.

At the panel, neither the virus’ impact on the campus and the globe’s Christians, nor the topic of the Jewish Passover, was raised. Instead the religion experts zeroed in on how the lockdown has complicated observing the upcoming month of Ramadan for the Islamic community, as well as how the COVID-19 response has hurt the marginalized in society, such as refugees.

The presentation was hosted by Georgetown University’s Berkley Center for Religion, Peace and World Affairs. The panelists called on the religious to consider the most vulnerable in society and how the coronavirus crisis hurts them more than traditional households.

The College Fix emailed and called a spokesperson for the center and Georgetown University officials on Tuesday, inquiring as to why Christian and Jewish voices were not included in the conversation. The requests were not immediately returned.

Wilkinson, whose online bio states that her research focus is on secular and religious influences in humanitarian action, said in her initial comments that “people with vulnerabilities are disproportionately affected” by crises such as the COVID-19 pandemic. 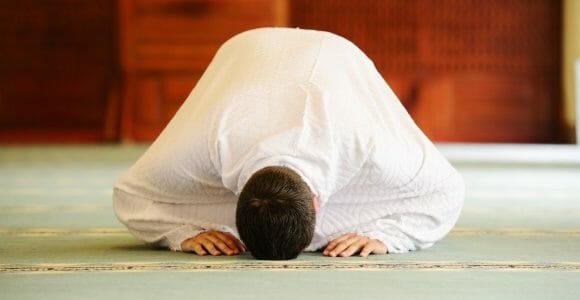 While she mentioned poor and sick individuals as just some of those “with vulnerabilities,” Wilkinson quickly pivoted the discussion to Muslim migrants and refugees.

If  you think that’s bad, a few years ago, Catholic University in Washington DC came under fire for being “too Catholic” which it was claimed is “offensive to Muslim students.”

Belief Net The complaint to the Washington, D.C. Office of Human Rights, filed by a leftist professor from rival George Washington University, says there are “too many crosses in every room of Catholic University” which is a “human rights violation that prevents Muslim students from praying there.”

GWU Law School Professor John Banzhaf takes the Catholic institution to task for acting “probably with malice” against Muslim students in a 60-page complaint that cites “offensive” Catholic imagery all over the Catholic school, which he says hinder Muslims from praying.

Banzhaf, who filed the complaint alleging that Muslim students are not given their own prayer rooms, alleges that the university, “does not provide space – as other universities do – for the many daily prayers Muslim students must make, forcing them instead to find temporarily empty classrooms where they are often surrounded by Catholic symbols which are incongruous to their religion,” according to the Tower, Catholic University’s student newspaper.

The complaint further objects that Muslims must pray at the school’s chapels “and at the cathedral that looms over the entire campus – the Basilica of the National Shrine of the Immaculate Conception.”