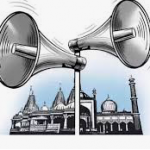 A local mosque will be blasting the highly amplified and very offensive Muslim Call to Prayer from its rooftop, in celebration of the month-long Islamic holiday of Ramadan.  If you’re thinking, no big deal, it’s like hearing church bells on Sunday, THINK AGAIN!

During Ramadan, both Muslims and non-Muslims alike will be forced to listen to the Call to Prayer which can be clearly heard from miles around. And they will have to listen to it 5 times a day, EVERYDAY, for an entire month, starting at the crack of dawn before sunrise.

Public broadcasting of this loud and offensive symbol of Islamic supremacism is something that Muslims have been petitioning for and increasingly gaining local approval of, enabling them to throw it in the faces of non-Muslims 5 times a day, everyday, in cities all around the West.

To hear the offensive shrieking of this Call to Prayer, click on any of the below videos. If you’re in Minneapolis, you might want to consider soundproofing your residence…or at least your bedroom if you like to sleep past 5 AM.