1.) Dianne Lob’s focus on Muslim immigration to the US should disqualify her for any consideration

Ms. Lob is virtually unknown to the Conference (COP) members, but she has been the leader of HIAS (Hebrew Immigrant Aid Society) for many years, which no longer serves Jews, but has been a leading  NGO that has been helping to bring Jew-hating Muslim immigrants into America for the past several years following 9/11.

2) HIAS: (The Hebrew Immigrant Aid Society, started in 1881, was created to help Jews escaping Russian pogroms and the Nazis in Europe to immigrate to America. Now HIAS serves the Muslim community, coordinating with terror-linked Islamic groups (including CAIR) to help flood America with Muslim invaders, the majority of whom hate Jews)

HIAS is not the proper organization from which the top leader of the American Jewish community should be chosen. We are also deeply concerned that Ms. Lob holds the same troubling views as the organization that she led. Especially at this time with the current administration in the White House.

It is reasonable to assume that Ms. Lob’s views are the same as those of HIAS. It is an understandable human trait, that when an individual desires an appointment to an important post, she will temporarily adjust her views to be palatable to persons making the decision. This phenomenon is so common that it has a name: “confirmation conversion.” It is thus reasonable to be skeptical if views Ms. Lob may have expressed to the COP nominating committee differed from HIAS’s positions and actions under her chairpersonship.

3) HIAS’s collaborations are inimical to the COP’s mission:

HIAS collaborates with Islamic Relief: HIAS has been “collaborating” (HIAS’s term) with Islamic Relief USA (IRUSA) on various matters for several years, including initiating a joint program in 2018 to provide legal assistance to Muslim migrants flooding (usually through Turkey) into Greece (and hence into the European Union). IRUSA is the American branch of, and has extensive financial and leadership ties to and interchanges with, Islamic Relief Worldwide (IRW). IRW and IRUSA have extremely concerning financing and other ties to Hamas and the Muslim Brotherhood.

An anonymous U.S. Department of Justice source told the media: “This is a national security issue. We know that these Muslim leaders and groups are continuing to raise money for Hamas and other terrorist organizations. Ten years ago we shut down the Holy Land Foundation. It was the right thing to do. Then the money started going to KindHearts. We shut them down, too. Now the money is going through groups like Islamic Relief.”

An Egyptian list of 30 alleged Muslim Brotherhood operatives in the United States included five current or former senior IRUSA leaders. Israel arrested an IRW official and banned IRW due to IRW’s terrorist activities (including funding Hamas). The UAE declared IRW and CAIR to be  terrorist organizations. The U.K.-based USBC bank shut down IRW’s banking operations because funds were likely to fall into terrorist hands. IRW also has ties to IHH (the Turkish terrorist organization and Muslim Brotherhood branch that perpetrated the Gaza flotilla attack on Israeli inspectors).

HIAS collaborates with CAIR, MPAC, etc.: HIAS announced that its Clearwater, Fla. program to resettle Syrian refugees “works closely with the Council on American Islamic Relations [CAIR].” HIAS also signed joint letters with CAIR and other virulently anti-Semitic, anti-Israel groups, including the Muslim Public Affairs Council (MPAC). The Muslim Brotherhood-affiliated CAIR is an unindicted co-conspirator in the Holy Land Foundation trial for funneling money to Hamas. The HIAS-CAIR-MPAC letters wrongly claimed that further security restrictions were unnecessary because Syrian refugees’ information was checked against government databases. In fact, the databases did not exist.

HIAS signed a letter, with Israel-bashing groups, defending Linda Sarsour: HIAS leaders co-signed a 2017 letter, together with Israel-bashers including Jewish Voice for Peace, IfNotNow, J Street, the New Israel Fund and T’ruah, defending Jew-hating, Israel-hating, BDS-promoting Muslim supremacist Linda Sarsour. The letter signed by HIAS condemned parties who criticize Linda Sarsour, by declaring: “We will not stand by as Sarsour is falsely maligned, harassed and smeared.”

In fact, Sarsour infamously asserted that “there is nothing creepier than Zionism”; praised the Palestinian Authority tactic of deploying children to hurl rocks at Israelis as the “definition of courage”; tweeted of genuine women’s rights advocates Ayaan Hirsi Ali (who suffered female genital mutilation as a child) and Lebanese-born Brigitte Gabriel “I wish I could take away their vaginas”; and embraced Rasmeah Odeh, a Palestinian terrorist convicted of murdering two Israelis, saying she was “honored” to be on the same stage with her.

4) Litigation and Advocacy Conflicts: HIAS has been initiating and has long been involved in divisive, left-wing litigation and public advocacy on the national and international stage, in opposition to the U.S. federal, state, local and Israeli governments.

HIAS’s litigation positions are detrimental to the safety of the American (and especially, American Jewish) public.

For instance, HIAS initiated and served as a lead plaintiff in multiple lawsuits against the Trump administration, to try to overturn the Trump administration’s travel bans to protect Americans (including vulnerable Jewish Americans). The travel bans suspended entry from six Muslim majority countries and two non-Muslim countries that do not share adequate information with the United States and/or present other serious risks of foreign terrorists entering the United States. These countries included three designated state sponsors of terrorism and five countries where violence shut down the U.S. embassy, rendering vetting impossible. The U.S. Supreme Court ultimately ruled in favor of the Trump administration.

HIAS is suing, alongside the legal assistance group IRAP and several individuals, to ask the courts to strike down this harmful, discriminatory and unconstitutional law.

HIAS President and CEO Mark Hetfield stated: “[I]t is not at all clear that there is any way to overturn the [U.S. President’s] executive order. The 1980 Refugee Act … gives the president broad control over immigration … The strategy HIAS is adopting now is ‘to be as public and as aggressive as we can. The only way we can change this policy is to embarrass the president.’”

HIAS also initiated a lawsuit opposing state and local governments’ ability to control resettlement in their districts. States, localities and concerned citizens have long been upset about resettlement agencies, such as HIAS, resettling MUSLIM refugees in their communities without the communities’ consent. In addition, when Texas Gov. Greg Abbott withheld consent for more Muslim resettlement in his overburdened state, HIAS publicly condemned him.

HIAS undermines Israeli policy: HIAS repeatedly opposes and undermines Israel’s efforts to contend with and repatriate the thousands of illegal Eritrean migrants whose criminal activities have made life virtually unlivable for the residents of southern Tel Aviv, especially elderly Jews. HIAS’s primary activity in Israel is assisting illegal, non-Jewish migrants against the Israeli government and people.

5) HIAS is NOT a Jewish organization:

HIAS is, by its own definition, not a Jewish organization, having officially dropped, in 2014, the word “Hebrew” from its name as being “exclusionary.”  Yet they still describe themselves as a “ global Jewish nonprofit that protects refugees.”

The vast majority of material on HIAS’s website does not promote Jews or Israel.

Given this and HIAS’s lack of Jewish clients, HIAS likely does not even qualify for COP membership. The “Processes and Procedures of the Conference of Presidents” (updated March 2017) limits COP membership “to those national Jewish organizations whose primary purpose is to serve the interests of the American Jewish community and whose activities are consistent with the goals and objectives of the Conference.” It would be inappropriate to select a COP chairperson from an organization that likely does not meet the COP’s membership requirements.

Today, HIAS primarily serves non-Jewish (and especially Muslim) clients; while ignoring endangered Jews who need to emigrate from Europe due to increasing anti-Semitism.

HIAS’s own complaint (in a lawsuit opposing the Trump administration’s efforts to protect American safety) states: “HIAS’s client base includes refugees abroad and in the United States who are from Syria, Iraq, Iran, Sudan, Somalia, Ukraine, Bhutan, the Democratic Republic of Congo, Afghanistan, Eritrea, Tanzania, Ethiopia, Burundi, South Sudan, Uganda, Russia, Belarus and Burma, among other countries. A very large percentage of these clients are Muslim.”

Notably, according to the ADL Global 100 Antisemitism Index, in 16 Muslim majority Middle Eastern countries, 74 percent to 93 percent of the population is anti-Semitic. HIAS’s activities thus risk harming American Jews and conflict with the COP’s missions of combating anti-Semitism and assuring the safety of American Jews.

A January 2017 Forward article stated that, in 2016, “about half” the refugees HIAS assisted were Muslim and only 169 (just 4 percent) were Jews, out of a total of 4,188 refugees. HIAS president Hetfield admitted in 2018, during HIAS’s internal COP litigation to try to silence ZOA from speaking up about HIAS’s activities, that approximately 45 percent to 80 percent of its clientele is Muslim, and about 5 percent is Jewish. HIAS’s website reveals that virtually its entire focus is on assisting non-Jews.

Chairmanship of the Conference is viewed by many as the highest honor in the American Jewish community. This honor should not be bestowed on a person who remains closely associated with an organization that promotes policies that conflict with the Conference’s mission to fight for Jews and Israel.

We should not underestimate the potential harm that Ms. Lob’s election could do to the Conference’s needed close relationships with the White House and Israel.

Recommendations: Given all of the above, we strongly and urgently recommend that the COP should: Immediately withdraw Ms. Lob’s nomination.

Morton A. Klein is the national president of the Zionist Organization of America.

Below are  some of the people who support HIAS: NYC Mayor Bill deBlasio, a notorious panderer to the Muslim community and Keith Ellison, a Muslim, who is a former congressman and the now the current AG of the heavily Muslim state of Minnesota. 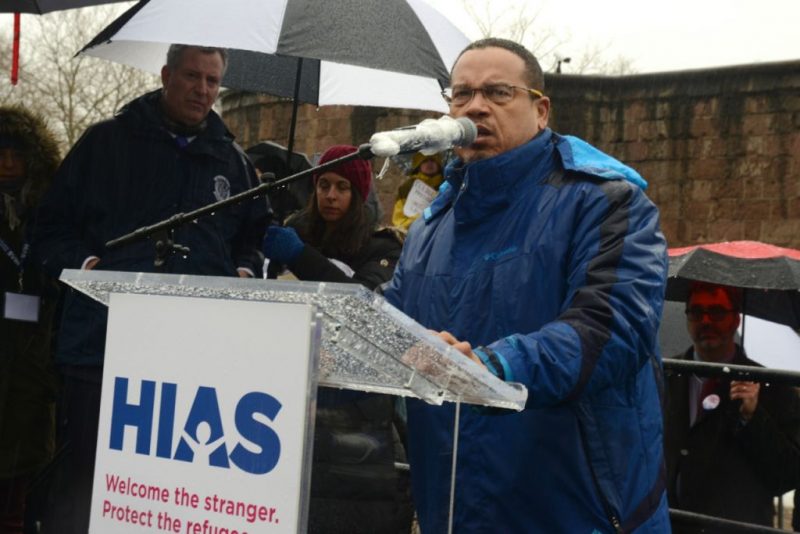