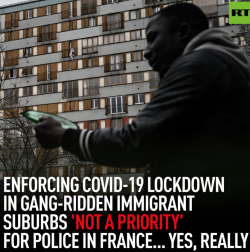 French prosecutors have launched an investigation after two police officers were reportedly caught on film making ‘racist’ remarks about an arrested Muslim thief. The incident happened in the early hours of Sunday after a North African man suspected of theft was pulled out of the Seine river after he tried to escape in the heavily Muslim migrant area of Seine-Saint-Denis banlieue north of Paris. 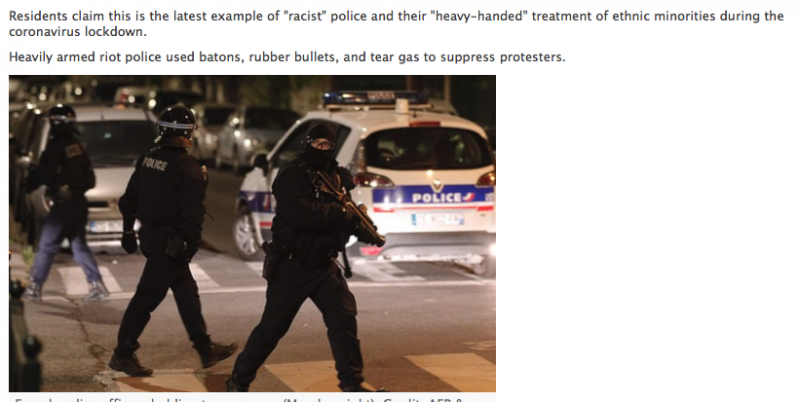 The Guardian In the video, reportedly made by a local resident, a police officer can be heard using an extremely offensive word for a North African Muslim, before adding: “They can’t swim. You should have attached a ball and chain to his ankle.” The man is then handcuffed and put into the back of a police van, where he can be heard shouting.

The film, posted on Twitter by Taha Bouhafs, a journalist and anti-racism activist, prompted the French interior minister, Christophe Castaner, to tweet: “A video showing a police intervention around the Île-Saint-Denis has provoked legitimate indignation. Light will be shed (on the incident).”

Éric Coquerel, an MP representing the Seine-Saint-Denis department, said the police officers’ behaviour was “unacceptable”. “I don’t know what the person had done … To hear racist words and behaviour from a police officer in this day and age is shameful and extremely worrying,” he said.

The Paris police chief, Didier Lallement, has demanded the immediate suspension of the two officers alleged to have made racist remarks.

The incident will not soothe tensions in the Paris banlieue, where relations between local “youths” and police are described by authorities and associations as “complicated”.

Anti-lockdown riots break out in Paris amid anger at police ‘heavy-handed’ treatment of minorities https://t.co/8EPE63bMWr pic.twitter.com/YwVErZF3Tn

Unrest erupted in Seine-Saint-Denis a week ago after an incident in which a motorcyclist hit a police car, leading to clashes between youths – who set fire to rubbish bins and cars, and even a school, and launched fireworks – and the police, who have been accused of a heavy-handed approach to the lockdown.

Clip shows firefighters trying to tackle a blaze after numerous vehicles were set on fire.

??? Fourth night of riots in the Parisian suburbs of Villeneuve La Garenne. There have also been incidents elsewhere in the banlieue de #Paris. #France #disturbed #Incidents #COVID19 #coronavirus pic.twitter.com/8xchFzMDxy

Rioting began in on Sunday night then spread to the notorious Seine-Saint-Denis Muslim migrant ghettos and other Muslim migrant suburbs of Paris. As Breitbart reports, after Monday night, areas in at least 25 cities and departments in France erupted in unrest in response to the original incident.

New York PostPolice on Monday launched tear gas and used batons against residents in Villeneuve-la-Garenne as fireworks exploded in the street,  the Daily Mail reported.

The mayhem also spread to nearby Aulnay-sous-Bois, where officers said they were “ambushed” by residents in a district made up mostly of immigrants who claim they are regularly subjected to harsh police treatment.

Police said they were targeted by people using fireworks as projectiles and arrested four residents.

Rights group SOS Racisme has issued a statement calling on authorities to shed full light on the incident with the biker, and urging police restraint “in this time of confinement and tensions.”

A police station in Strasburg was set on fire by protesters who say they are “sympathetic” to the Paris rioters. But the question is, are these people rioting against the police for their heavy-handed enforcement of the lockdown or is this just more of the tension between Muslims and French police?

It may be a combination of both. Three police officers are being charged in the death of the man in custody for violating the lockdown regulations.

A third video features a woman expressing shock as she records Muslim individuals throwing gasoline on a car to accelerate the fire. Then men then start aggressively chanting and running down the street.

The catalyst for the clashes, which have been taking place in areas such as Villeneuve-La-Garenne, Nanterre and Clichy, was an incident during which a 30-year old motorcyclist injured in a collision with an unmarked police car during a chase was left with a broken leg.

Last week in Béziers, in the south of France, it was announced that three police officers were facing criminal charges after a father-of-three died while under arrest for breaching the Coronavirus lockdown.

The officers, who were videoed dragging Mohamed Gabsi, 33, along the ground during a curfew, face charges of “intentional violence by a public official leading to manslaughter” and “non assistance of a person in danger”.