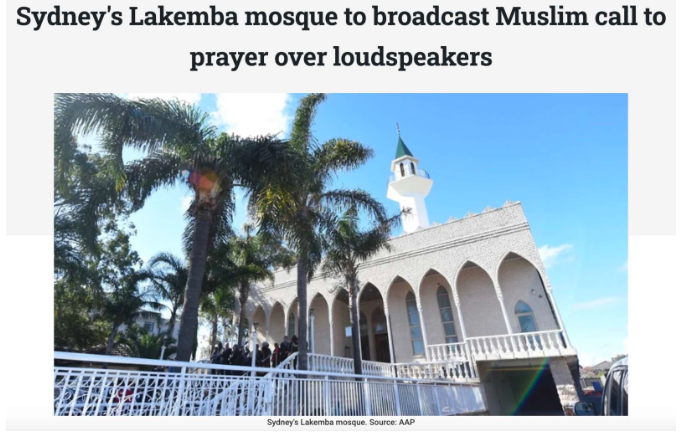 …using the brand of megawatt sub-woofer loudspeakers favored and mandated by the paedophile prophet Mohammed.

Michael Smith News Australia’s largest mosque will begin broadcasting the Muslim call to prayer over its loudspeakers during Ramadan, a move that is hoped will bring the community together during the coronavirus pandemic.

The Lakemba mosque in Sydney will begin broadcasting the Muslim call to prayer, or Adhan, over its loudspeakers.

Following on from a one-off broadcast last Wednesday, the executive director of the Lebanese Muslim Association (LMA) that runs the mosque, Ahmad Malas, told SBS Arabic24 that the call would now ring out at dusk until the end of Ramadan on May 22. (At least they aren’t doing it 5 times a day starting before dawn as they are in Minneapolis, Minnesota)

The call to prayer is traditionally made by the sheikh of the mosque from the top of one of the minarets using a microphone and is intended to propel across the sky.

Below is an example of the Call to Prayer being blasted  from amplifiers located in the two high minarets at a mosque in Sydney back in 2014 for the first time. Non-Muslims are forced to listen to this crap.

AA.com (h/t Manos) The Islamic call to prayer will ring out from two mosques in Melbourne, Australia, throughout Ramadan, the Muslim holy month of fasting.

The municipalities of Hume and Dandenong, both home to large Turkish communities, have allowed the call to prayer, or adhan, to be broadcast for the evening and Friday prayers.

The move is a gesture of support for Muslims who are observing Ramadan during the coronavirus pandemic.

Official figures place the number of Muslims in Australia at about 604,000 and over 200 mosques are believed to have been closed down temporarily due to measures to curb the spread of COVID-19.

This is nothing new for Melbourne, home to Australia’s largest Muslim invader population who have been annoying their non-Muslim neighbors with these nauseating sounds of the Call to Prayer for many years now.