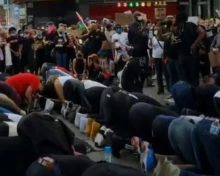 In Brooklyn, NY, hundreds of protesters formed a protective circle around Muslims so they could bang their heads on the ground and stick their asses in the air in an act of Islamic supremacy right in the middle of a Black Lives Matter demonstration.

METRO UK A video shows non-Muslims creating a human shield around Muslims so they can pray safely from the harm of the NYPD.  Stance Grounded, who tweeted the footage, said: I LOVE THIS. THIS IS HUMANITY!’ He added: ‘They were really prepared to get tear gassed, maced, shot w/ rubber bullets just so fellow humans could pray in peace. If that isn’t LOVE, I don’t know what is. If that isn’t HOPE, I don’t know what is’.

I guess Black Americans are still ignorant of how Blacks have been treated by Muslims throughout history, up through and including today.  According to a preeminent Islamic historian: “The Negro nations as a whole are submissive to slavery because they have attributes that are similar to dumb animals.”

Compare the USA’s short Colonial slave  to that of the of Arabs (Islamic and Pre-Islamic) who colonized North and East Africa, who hunted, enslaved, tortured and killed Ethnic Africans for several thousands of years before the same geographical Arabs started/opened the slave trade to Colonial America.

One of the most tragic facts is that MECCA, the geographic heart of the Muslim community, was one of the LARGEST SLAVE MARKETS in the Muslim world all the way up until the 2Oth century when the standards of the international community, championed by the West  informed Muslims that chattel slavery is a violation against dignity, humanity and their own standing in global affairs.  But today, black slavery is alive and well in many countries in Africa where there are Muslims.