This is the moment a spooked police horse bolts at London’s Black Lives Matter protest after its rider was thrown from the saddle. Videos on social media show objects being thrown at the mounted officers in protective gear. Footage shows the animal galloping down Whitehall sending rioters scattering.

The SUN  Other clips show the injured police officer lying on his back on the ground being helped by police and another protester.

A Met Police spokesperson told The Sun Online: “The officer is currently in hospital, receiving treatment for the injuries which are not life-threatening.

“The horse, uninjured, made its own back to the stables nearby.” 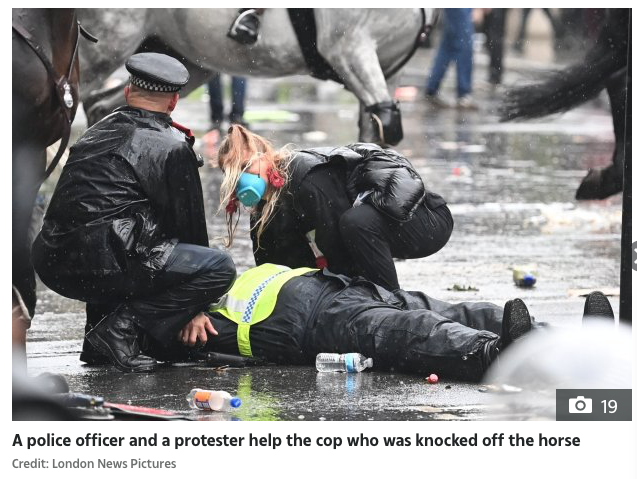 Another video from the scene shows a woman lying on the ground, reportedly after being hit by the runaway horse. Moments before, flares were lit outside Whitehall as crowds chanted.

Earlier in the day, the Winston Churchill statue was vandalised during today’s Black Lives Matter protest in London’s Parliament Square.

Pictures show police officers standing in front of the memorial with neon green graffiti defacing it on the 76th anniversary of D-Day. It appears the world-famous memorial was defaced with letters ACAB – which is believed to stand for ‘All Cops Are Bitches’.