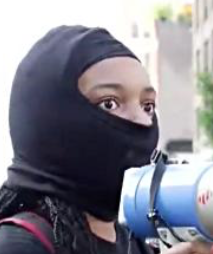 But then, she quickly insists: “This is a ‘peaceful’ protest.” During the George Floyd rampages in New York City, a Black Lives Matter activist, (wearing what appears to be an Islamic hijab) declares that she has every right to “burn this motherf*cker (New York City) to the ground,” while urging the crowd not to be violent.

Breitbart  On Saturday, while speaking to protesters, a BLM activist asked the crowd not to attack New York City Police Department (NYPD) officers while declaring that she had every right to burn the city down.