Why do you think for at least the past decade, George Soros has been funding and facilitating the invasion of Europe and America by millions of Muslim migrants, both legal and illegal. The nationwide riots over the murder of George Floyd have offered new insight into the unholy alliance between Leftists and Islamic supremacists. 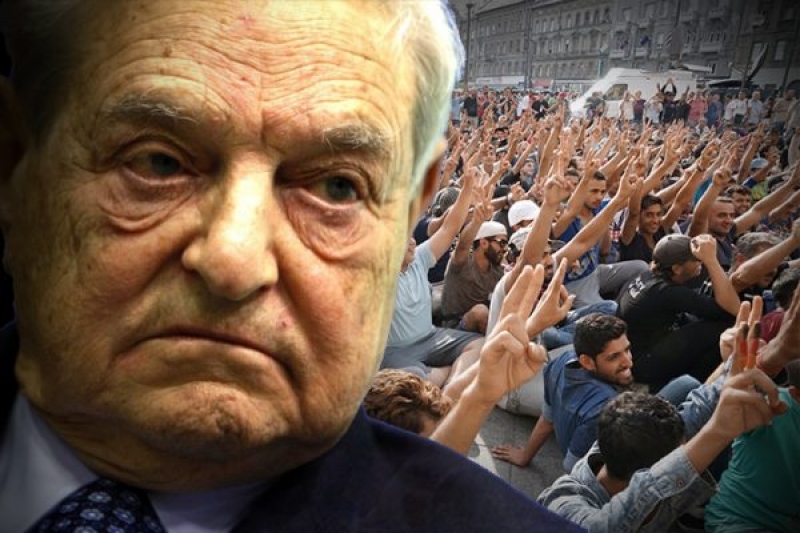 Imraan Siddiqi of CAIR-Arizona tweeted out a video of a hijab-wearing Muslim woman kicking a tear gas canister toward police with the approving comment, “Drop-kick that tear-gas canister, sister.”

Meanwhile, in Los Angeles, rioters were so grieved and angered by Floyd’s death that they spray-painted “Free Palestine” on the wall of a synagogue and set it on fire. 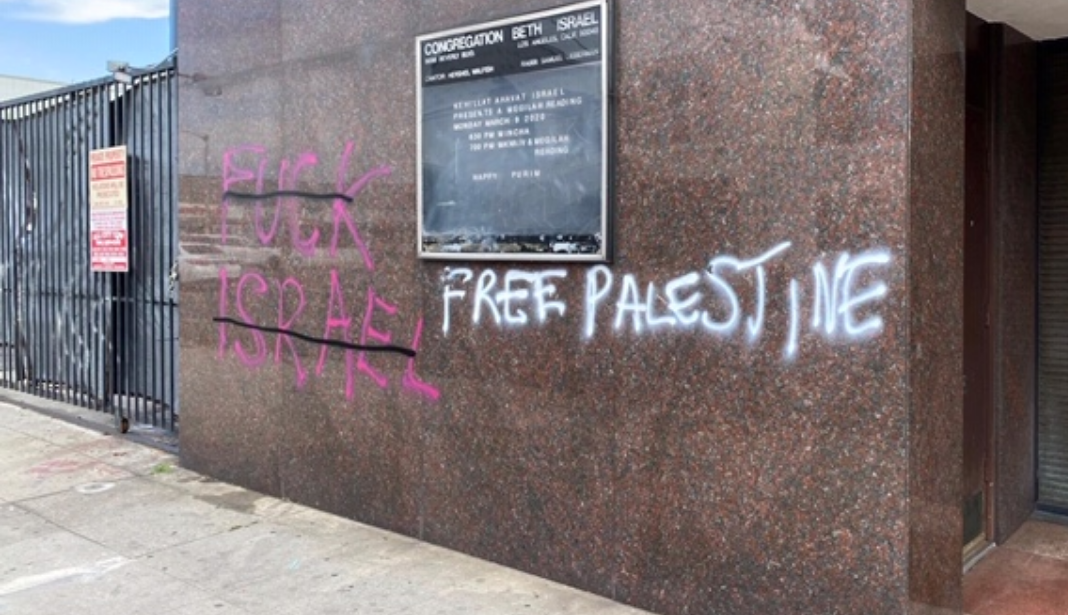 And in New York City, Urooj Rahman (below), a Muslim housing attorney is in legal trouble for tossing a Molotov cocktail at a NYPD cruiser during the recent riots in New York City. She is also a committed activist for the Palestinian jihad, having published agitprop spreading false claims of Palestinian victimhood. 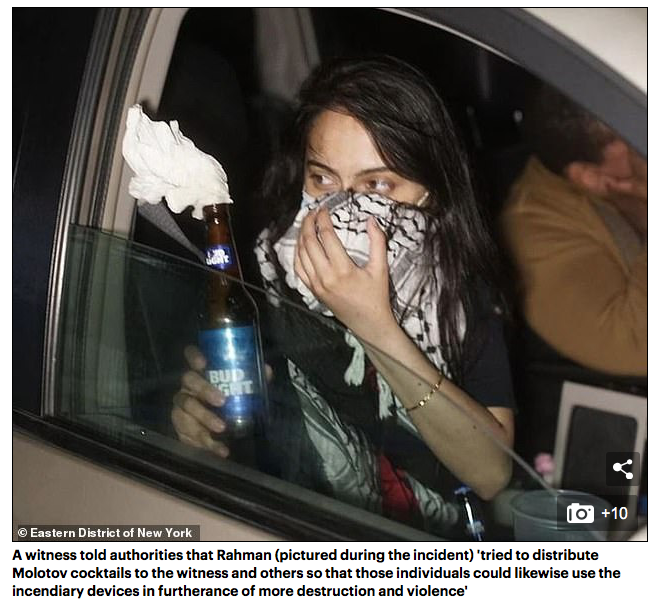 Despite the hot water Urooj Rahman is in now, however, she has a bright future as an ideological leader of both the Left and the Islamic jihad. In an interview before her attack, she enunciated the common goal of both movements: “This s–t won’t ever stop unless we f–kin’ take it all down.”

In both the interview and during her attack, Rahman kept a Palestinian keffiyeh close to her face. Her sartorial choice was not incidental. With her attempted torching of the police cruiser (her Molotov cocktail didn’t light), she brought Palestinian jihad tactics to the riots in the U.S. She also revealed the congruence between the ideology of the Left in America today and that of jihadists, not just the Palestinians, but all over the world.

Regarding Israel, the goal of the Palestinian jihad is and always has been to “f–kin’ take it all down.” That is the meaning of the increasingly common slogan “From the River to the Sea, Palestine Will Be Free.” If “Palestine” must be “free” from the Jordan River all the way to the Mediterranean Sea, the Palestinian cause is not about ending “occupation,” or stopping “settlements,” or anything that the establishment media tells us about it.

It is, rather, about destroying Israel altogether, as The Palestinian Delusion

documents in detail. Until that goal is attained, as Urooj Rahman elegantly put it, “This shit won’t ever stop.”

The same thing can be said of the jihad all around the world. As The History of Jihad

shows, for 1,400 years the goal of Islamic jihad activity has essentially been “This shit won’t ever stop unless we fukin’ take it all down.” 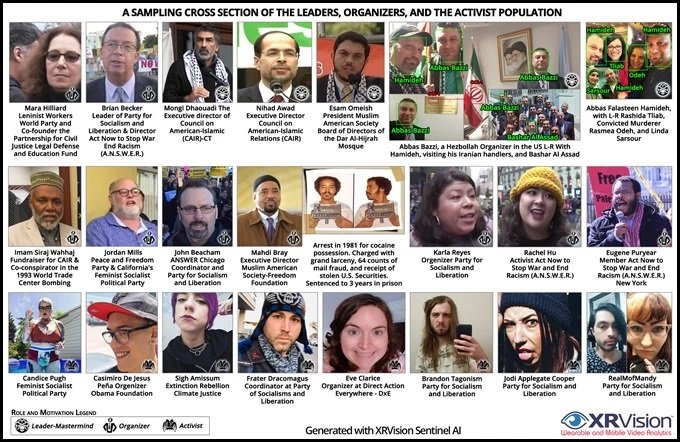 Although non-Muslim scholars and analysts routinely and wrongly insist that Islam is a religion of peace and jihad is a spiritual struggle, Islamic scholars have stated otherwise throughout the history of Islam. In his book War and Peace in the Law of Islam, Majid Khadduri, an Iraqi scholar of Islamic law of international renown, says this about jihad:

“The state which is regarded as the instrument for universalizing a certain religion must perforce be an ever expanding state. The Islamic state, whose principal function was to put God’s law into practice, sought to establish Islam as the dominant reigning ideology over the entire world….The jihad was therefore employed as an instrument for both the universalization of religion and the establishment of an imperial world state.”

This is not a new idea. The twelfth-century Maliki jurist Ibn Rushd stated: “Muslim jurists agreed that the purpose of fighting with the People of the Book (Jews)…is one of two things: it is either their conversion to Islam or the payment of jizyah.” 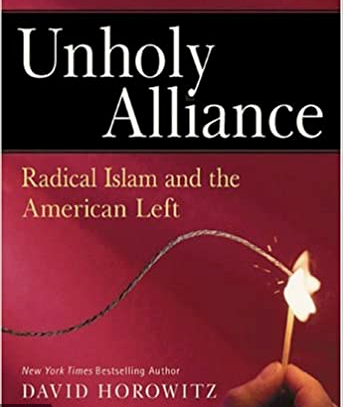 Imran Ahsan Khan Nyazee, assistant professor on the Faculty of Shari’ah and Law of the International Islamic University in Islamabad, states that Ibn Rushd “leaves no doubt that the primary goal of the Muslim community, in the eyes of its jurists, is to spread the word of Allah through jihad, and the option of poll-tax [jizya] is to be exercised only after subjugation” of non-Muslims.

Or here again, “This shit won’t ever stop unless we fuckin’ take it all down.”

Meanwhile, the Left’s anti-Americanism, and determination to “f–kin’ take it all down,” has been on abundant display in the recent riots, and continues, to the apparent delight of Muslims such as Urooj Rahman, Zahra Billoo, and Imraan Siddiqi. When she was arrested, Rahman was wearing a T-shirt emblazoned with the slogan “THE STRUGGLE CONTINUES REGARDLESS.” The Arabic word for “struggle” is, of course, jihad.