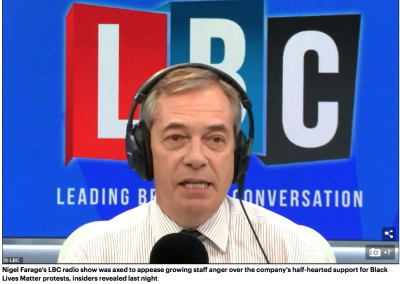 In Bristol, a statue of the slave trader Edward Colston was torn down and pushed into a river, meanwhile, in London landmarks such as the Winston Churchill statue in Parliament Square were defaced with graffiti. Unsurprisingly, Nigel Farage wasn’t a fan of the actions of the protesters and compared them to the Sunni Islamic fundamentalists and Afghan military organization the Taliban (who blew up all the historic Buddhist statues because they were considered blasphemous to Islam).

Daily Mail The remarks sparked outrage among some Global employees, who sources say were already exasperated at the company’s half-hearted support for the BLM movement.

Some of Global biggest stars were among employees who demanded bosses back up their public support for the BLM movement with actions.

‘Everyone across the board was furious. The mood was not great. Both production and presenters made our feelings known to the bosses,’ one insider told the i, following Mr Farage’s criticism of BLM.

Capital Xtra breakfast show hosts Yinka Bokinni and Shayna Marie Birch-Campbell underscored their unhappiness with Global Media’s stance, writing ‘we currently don’t feel like we have the backing of the place we call home,’ according to the Guardian. 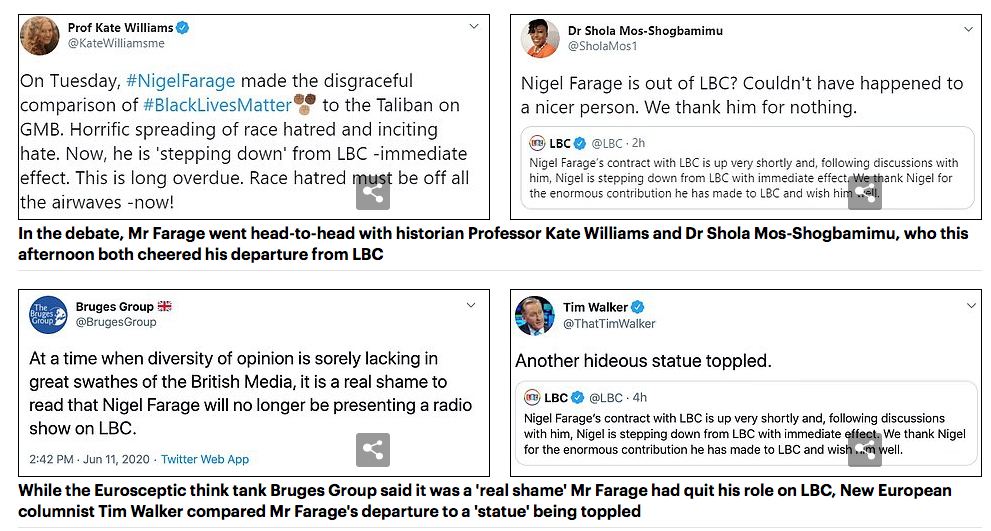 Mr Farage’s sudden departure was cheered by LBC presenter and vocal Remainer James O’Brien who triumphantly gloated: ‘We got our station back’.

But in today’s interview with Mike Graham on Talk Radio, Mr Farage defended his GMB comments and said he was ‘screamed at like I was a liar’ by the other panelists.

He added: ‘The three words on their own – Black Lives Matter – nothing wrong with that and if people say they want to make sure throughout society there is equality of opportunity or deal with whatever unfairness there is in society, that’s fine. 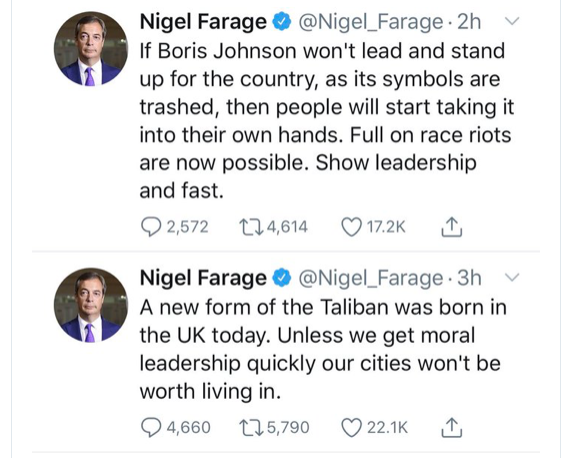 ‘Black Lives Matter as an organization is a Marxist anarchistic organization that seeks to defund the police, to overthrow the capitalist system, to put in place reparations for slavery.

‘They’re not going to go away because a few statues have been brought down. They will continue until they have fundamentally changed society.

‘And I think this is not a lot more than about George Floyd, and the appalling manner of his death. This is now an all out attack on our nation, our symbols, our heritage. It’s an attempt to make us all feel ashamed of who we are.’

LBC has downplayed the departure and insisted Mr Farage’s current contract was ending, but his own producer Christian Mitchell suggested he had been blindsided, tweeting: ‘Hearing this on social media…’

The station said: ‘Nigel Farage’s contract with LBC is up very shortly and, following discussions with him, Nigel is stepping down from LBC with immediate effect.

‘We thank Nigel for the enormous contribution he has made to LBC and wish him well.’