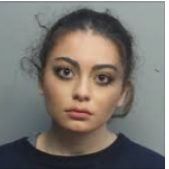 And designated terrorist group CAIR litigation jihadists appear to be gearing up to file a lawsuit over the incident. Headbags (aka hijabs) allegedly are worn by Muslim women for “modesty.” Yet check out Alaa Massri below in her body hugging shirt and skin-tight yoga pants.

CNN Alaa Massri was arrested at a protest June 10, according to the Miami Police Department, and charged with battery, resisting an officer with violence and disorderly conduct. 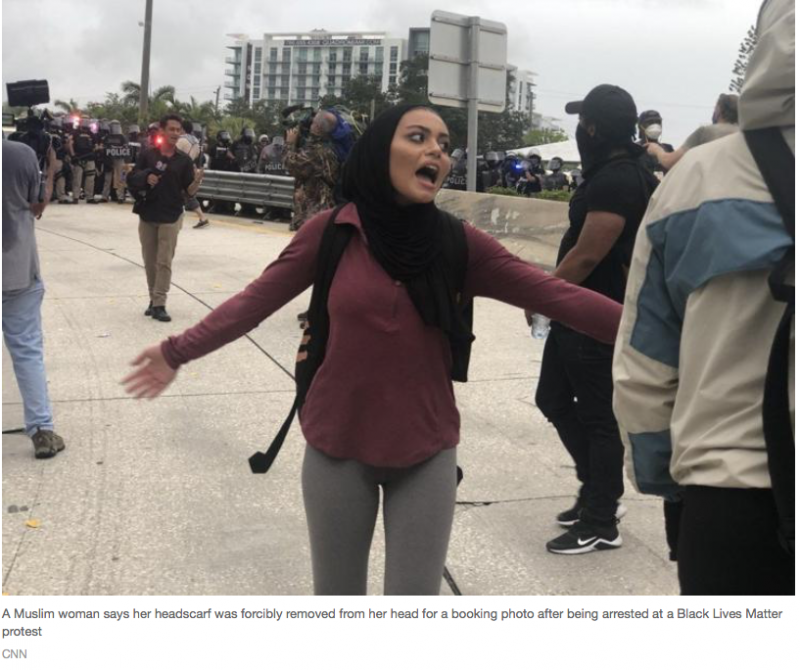 After her arrest, Massri was taken to the Miami-Dade Turner Guilford Knight Correctional Center, where she says she was told to remove her hijab for a booking photograph (as required by law)  and claims she was not allowed to put it back on for several hours, her CAIR lawyer Khurrum Wahid told CNN.

Muslim women who choose to wear the hijab allegedly do not take it off in front of men outside of their immediate families.

After advising the officers that the hijab is a part of her religious beliefs and she did not wish to be photographed without it on, it was forcibly removed from her head, Wahid said (as required by law). She was not allowed to put her hijab back on for what she estimated to be around seven hours.

Massri’s booking photo, which showed her without her hijab, was then distributed to several news outlets and began circulating on social media, according to Wahid.

“The damage from that cannot be undone,” Wahid told CNN. “That photograph is out there forever. (And thanks to BNI, it is out there for the whole word to see forever) This was a humiliating experience for her. Not just the arrest, but that her religious rights were violated.” (Oh, BOO HOO)

This “completely disrespect(ed) my way of life,” reads a Change.org petition started by Massri a week ago. “They consciously took away my rights to be a woman practicing Islam and spread an image she never thought would be out in the world.”  (Especially the image that shows off your boobs and “camel toe” which is slang for the outline of a woman’s labia majora in tightly fitting pants)