It won’t surprise you that most of the e-mails I receive from Muslims obviously are too foul and violent to post. But here’s one received recently, allegedly from a Muslim teenager, who is very upset with the content of BNI. 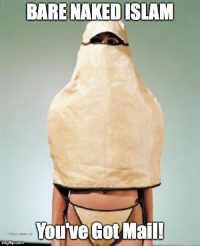 She writes: I know you’re all too stubborn to listen but….

I can’t believe the amount of blatantly racist information you all have posted on your site.

All I can say is in the least is that it is so truly disgusting.

HOW DARE YOU VERBALLY ATTACK SO MANY INNOCENT PEOPLE OF A BEAUTIFUL COMMUNITY!

It is one thing that people like me and so many others I know live our day to day life minding our own business, never bothering anyone else, enjoying our faith and NEVER JUDGING YOURS, but you SICK FUCKS CANT LEAVE US ALONE you can never judge a whole faith from the few who have followed and committed sins.

Do we do that to others faiths? No. Now me a teenager because of you and others like you has to deal with people calling me a TERRORIST in the hallway when all I did was say hi.

IS THAT WHAT YOU WANT? The world is working so hard to get over racism, and you have the NERVE to not call yourself racist when you, you cause innocent children pain in their day to day life, how dare you?

RESPONSE to her from BNI:

What “race” is Islam?