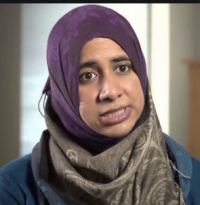 Billoo fears it might not be safe for someone who looks like her to call on police to protect her. I agree, she should make a beeline back to the Islamic hellhole she crawled out of.