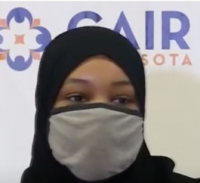 A Muslim baghead goes to the cafe in a Target store and orders a coffee. When the barista asked her name, she said it was “Aisha,” a Muslim name which he had probably never heard before, let alone seen in print. When her coffee cames out, it had the name “ISIS” on it, which was obviously written by someone who had no idea how to spell her Muslim name.

She was outraged at the mistake and complained to the manager after which he quickly apologized for the error. But that wasn’t enough for her. So she complained to CAIR-Minnesota (notorious litigation jihadists) and now they are holding press conferences and calling it a “racist” incident (what “race” is Islam?) for which they want the employee fired. The Muslim bitch claims the word ISIS  shatters Muslims’s reputations around the world.  I beg to differ, ISIS defines Muslims’ reputations around the world.

If you wish to voice your support to Target, this is what one BNI reader did:

After a lot of automated instructions, I finally got through to a representative of Target who took my comments and will relay them to the CEO. I was told that the Starbucks inside of Target stores are owned by Target. I expressed support for Target and told them to stand strong. They acted appropriately and don’t need to take any further action.

The number is 612-696-3400 if anyone else would like to call and express support. It takes a while, but if you follow the prompts, you will eventually get a representative.

And then there was this Coffee Cup Jihad incident: