Replace the Swedish flag with something more “inclusive” says scientist and board member of the Humanist society Patrik Lindenfors in an opinion piece published in Göteborgs Posten. In the wake of the protests around the world, there are now calls to change the Swedish flag because of it’s Christian heritage.

Times of Sweden The Swedish flag is a cross flag, with a symbol of a cross on it representing Christianity. The design of the flag is thought to have it’s origin in the cross banner used in the third crusade. 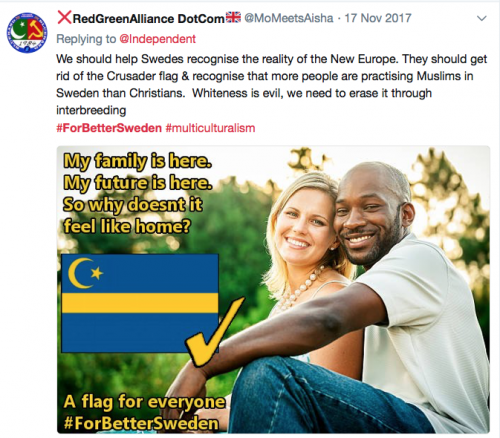 But according to Patrik Lindenfors the symbol is “problematic”, claiming that Christianity is connected with slavery and claiming that there isn’t any rule against slavery in the Bible.

However, the people who fought to abolish slavery were Christian men like William Wilberforce and John Newton. He also says that another reason to change the Swedish flag is because a majority of Swedes are no longer Christian and that Christianity hasn’t had the most positive effect on Sweden.

Eva Brunne, the Swedish lesbian bishop (below) who took down all the crosses in her church so as not to offend Muslims, says: “I have more in common with Muslims than with right-wing Christians”

Also, he thinks that using the Swedish flag in military operations in Middle Eastern countries is problematic, as it can be “interpreted as a crusade banner”. Sweden has been involved in Afghanistan.

There has recently been calls in Sweden to change Swedish heritage, among other things there were calls from a former Mayor to replace a statue of the famous Swedish King Charles XII with a statue of Greta Thunberg.

Threats have been made against statues of famous botanist Carl Linnaeus, prompting football supporters to defend a statue from far-left extremists.

PAT CONDELL on the cultural suicide of Sweden