In a shocking video out of Iran, which has been circulating on social media, a man gets out of his car in order to hurl foul abuse and threats at the teenage girls for refusing to wear the required hijab (Islamic headbag).

Daily Mail (h/t Thereza B)  During the heated exchange, he threatens the girls, saying ‘I’ll f*ck your mother’ and claims their behavior is ‘immoral’ while a real police officer stands around and does  nothing to intervene or protect the girls.

Wearing a hijab has been compulsory for women in Iran since the Islamic revolution in 1979, a rule which is enforced by the state’s morality police. 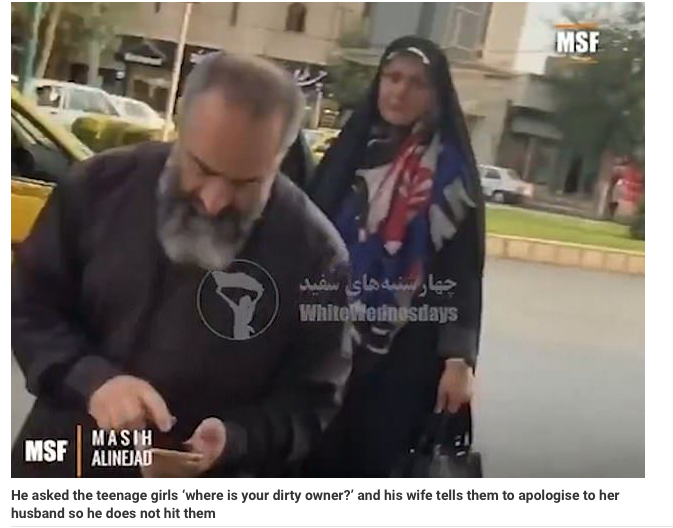 The video shows, as tensions between the man and the teenagers grow, the man’s wife gets out of the car and asks them to ‘apologize to my husband so he won’t hit you.’  The woman informs them that her husband is from the intelligence services and could get them arrested.

After the man spits in the girls’ faces, another woman wearing a hijab pushes him.  A police car arrives shortly afterwards but the officer watches from afar and the teenagers scream: ‘Officer, why aren’t you doing anything?’

In July last year the semi-official Fars news agency quoted the head of the Tehran Revolutionary Court, Mousa Ghazanfarabadi, as saying that ‘those who film themselves or others while removing the hijab and send photos to this woman … will be sentenced to between one and 10 years in prison.’

FROM 2018: Look what an Iranian woman does when a cleric tells her to fix her hijab or he will have her arrested.

Provocative footage has emerged of the moment a Muslim woman challenges a cleric who ordered her to fix her inappropriately-fitting hijab on a public street in Iran. The man can be seen telling the woman to ‘fix your hijab or I’ll get you arrested’ when the woman tears the veil off her head in anger and walks away. 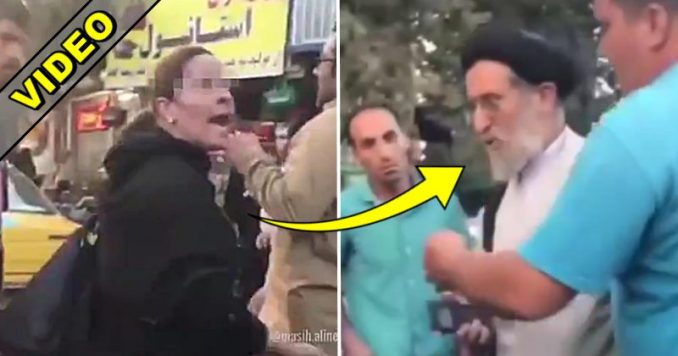 According to the Metro, the woman confronts the cleric, ripping off her veil and forcing him to gaze upon her “immodesty” before loudly reprimanding him. The woman, who has bravely defied Islamic law, then furiously storms off as the imam and other Muslim men are left aghast at the display.

Iranian law for the last four decades has dictated that women must cover their heads in public, with failure to do so a jailable offence. However, there is a growing movement of people in Iran who oppose the laws that make it mandatory for women to wear veils.