Ibrahim E. Bouaichi, 33, of Greenbelt, Md., had been indicted on charges of rape, strangulation and abduction after Karla Dominguez, a native of Venezuela, told cops in Alexandria, VA that he sexually assaulted her in October, the Washington Post reported. 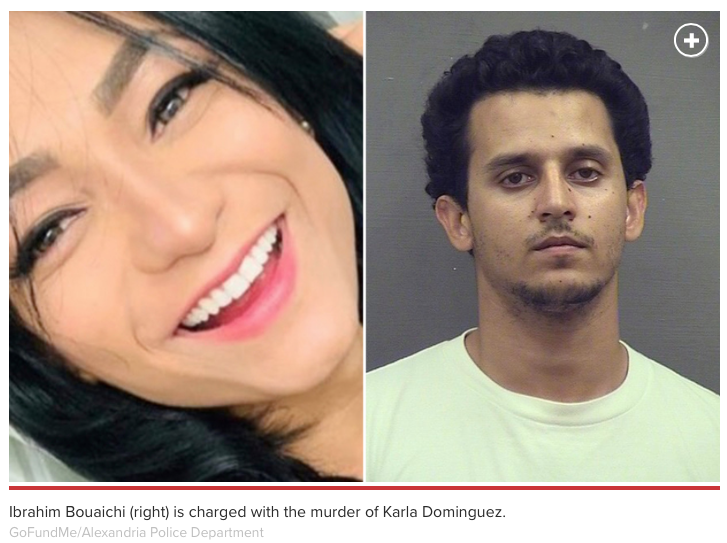 NY Post (h/t Marvin W) A judge ordered him held without bond. Then, despite objections by an Alexandria prosecutor, lawyers for the man, who was charged with six felonies, successfully argued on April 9 that he be released on $25,000 bond — with a condition that he only leave his Maryland residence to meet with lawyers or pretrial services officials, the newspaper said.

In their motion requesting bond, Bouaichi’s lawyers had argued that it was “impossible” to provide their client with adequate social distancing and other safety measures amid COVID-19 while behind bars, according to the report.

Less than a month after Bouaichi’s release from the Alexandria jail, he was arrested May 8 for allegedly ramming a K-9 officer’s vehicle in Greenbelt.. He was charged with first-degree assault, harming a law enforcement dog and other counts and released May 11, Maryland court records show.

Alexandria Commonwealth’s Attorney Bryan Porter told the Washington Post that at the time, local authorities there were not notified of the charges Bouiachi faced in Prince George’s County. They would have tried to revoke bond for him if they had been, Porter said.

On July 29, Alexandria police say, Bouaichi, 33, returned to Alexandria and shot and killed Dominguez outside her apartment in the city’s West End. When the police went to arrest Bouaichi, they found he had apparently shot himself. He was reported to be in grave condition Thursday.