Mystery assailants torture, mutilate, and kill horses in a spate of gruesome attacks that have stunned France. 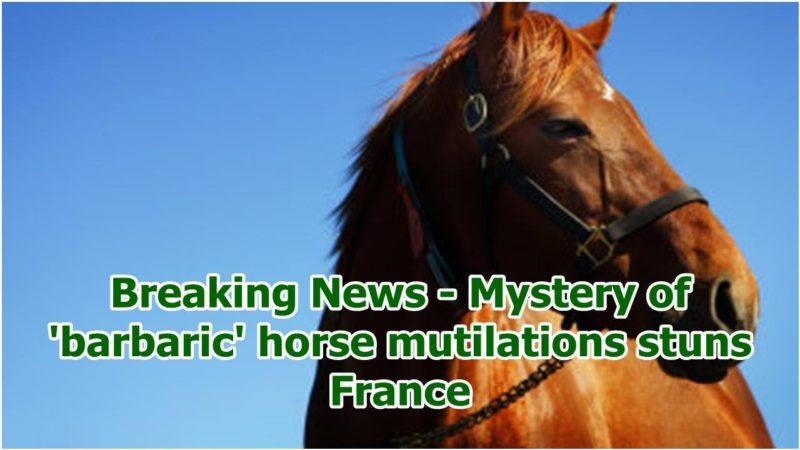 The latest in Cortambert, a village in the Saone-et-Loire region, occurred overnight on Friday. The one-year-old filly’s right ear was cut off, one of its eyes was gouged out, its neck slashed and its genitals had been cut away.

But police are struggling to identify the perpetrators or find a motivation behind the cruel killings, and are probing possible satanic links. (See links at bottom of page)

Jessica Martin, a police captain, said: ‘Everything leads us to conclude that the horse was tortured. It’s utterly barbaric.’ She said there were also cases between 2014 and 2016 and that similar killings and mutilations of horses had been reported in the past in Belgium and Germany. 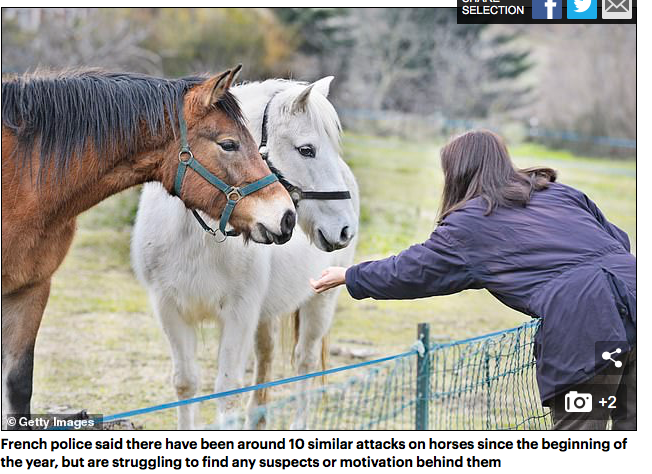 But the high number in France was unprecedented over such a short period. ‘We do not understand the motivation. Is it a satanic rite, insurance fraud, some macabre trophy hunt or an internet challenge? We don’t know. It is very traumatizing,’ she said.

She said several different breeds of horses had fallen victim, as well as one donkey, and that mutilation of an ear was a common factor. No meat had been taken from the carcases.

The latest series of killings began of February 12 of this year, when a staff member at the agricultural college in Moselle, near France’s eastern border with Germany, found the corpse of a horse lying in its paddock.

Thee days later, the son of a racehorse trainer found the body of Démon du Médoc, with an ear removed.  The trainer, Philippe Boutin, said ‘I think they made him keep galloping and he died of heart failure, and then they cut off his ear.’

In one instance, a horse had been electrocuted, believed to be with a portable generator, while others appeared to have been stunned or killed by a blow with a large stone before then being mutilated.

In April, a two-year-old horse was found dead by the daughter of a woman who breaks in horses.  Stéphanie Gachelin said: ‘At first we thought it was a natural death, then we discovered traces of wounds, and one of her ears was missing.’

Two other horses were found with wounds – on on the head and the other on the haunch, according to The Daily Telegraph.

The following links offer hints as to who might have done this:

FRANCE: Muslim savage in Marseilles films himself hurling a little cat against the wall of a building

TURKEY: Muslim animal abuser chops off all the legs and tail of a puppy just for fun

HORSES FIGHTING TO THE DEATH in a Muslim festival tradition

INDIA: A Mama dog with 5 puppies was allegedly raped, then dragged to her death by two Muslims after being tied to the back of their scooter

FOUND! The video of extreme Muslim animal abuse of a helpless donkey

GREECE: Body of female dog that had been brutally raped to death found in a Muslim migrant camp

SWEDEN: Four Tunisian Muslim savages behead and skin a cat and brag about it on Facebook and Twitter

INDIA: Pregnant goat dies after being gang-raped to death by eight men with Muslim names

What is it about Muslims and donkeys and where are the animal rights groups?

ANOTHER TURKISH GENOCIDE: No, not Christians this time…dogs

And you thought Muslim cruelty to animals was only limited to dogs and barbaric Islamic halal animal slaughter?

Is there any living creature on earth that Muslims don’t enjoy stoning to death?

IRAN: To increase business at the zoo, live donkeys are fed to the lions every Thursday