GOTTA LOVE THIS GIRL! She rightly F-Bombs the Muslim supremacist who puts his disruptive and inconsiderate religious needs before anyone else’s rights in a classroom, saying “Go do this somewhere else. Fuck your religion. Fuck you. I don’t care about your prayers.” 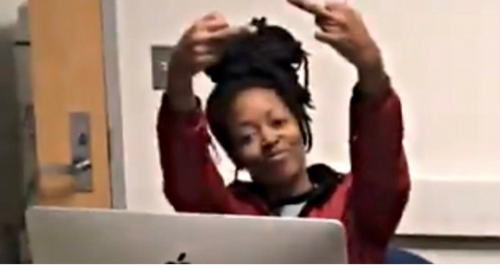 For the second time in less than a month, the Council on American-Islamic Relations (CAIR) is calling out individuals in Denver for alleged anti-Muslim actions. The latest incident involves a woman hurling F-bombs at Muslim students praying at Metropolitan State University of Denver

In the video, a very non-Muslim looking spokesjihadist from CAIR wants the student disciplined for her anti-Muslim behavior and then be educated about Islam so her ignorance won’t make her say things she will regret.

So we’re praying Maghreb and this lady starts going off trying to say “DO THIS SOMEWHERE ELSE” and then starts bumping music. So we confront after and she begins with “F your religion..F you..I don’t care about your prayers” just belligerence. Omar comes to pray and she continues pic.twitter.com/5ln0nm7l2I

True to form, CAIR thugs  got this non-story on every left wing news program that would be bothered airing such nonsense.