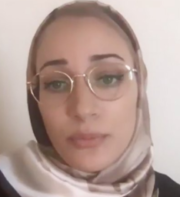 CAIR’s National Litigation Jihad Defense Fund today announced the filing of a lawsuit in federal court on behalf of a Muslim woman who alleges she had her Islamic supremacist headbag (hijab) forcibly removed by three great big, burly officers from the Los Angeles Police Department without her permission.

KNX1070 Nusaiba Mubarak, 26, had attended the meeting to speak out against police brutality regarding an LAPD fatal shooting incident in 2018 when officers removed several people for exceeding public comment limits and other issues. She said she committed no violation of Commission Rules but was escorted out with others anyway and then claims she was searched in a separate room by police officers.

By officers removing her head scarf without her consent Mubarak and her attorney, along with the Council on Islamic American Relations (CAIR), contend the removal of her hijab was a violation of her First Amendment religious rights and Fourth Amendment rights. 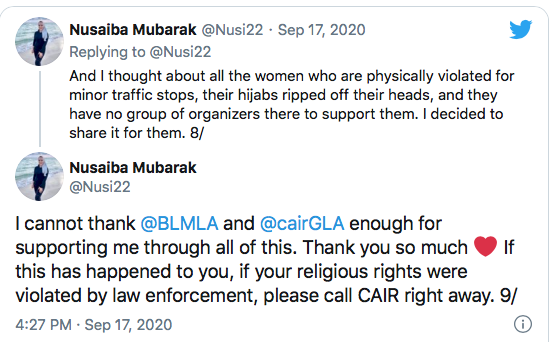 According to the CAIR California press release: “Mubarak was then subjected to an intrusive physical search where her hijab was removed without her consent as she stood handcuffed and incapacitated. During the search and the hijab removal, an additional male officer remained in the room. Mubarak immediately informed the officer that her headscarf was worn for religious purposes and that it should not be removed in the presence of males and requested her hijab be replaced. The female officer ignored her complaint while Mubarak remained handcuffed, exposed, and humiliated.”

“It is shocking that the Los Angeles Police Department, which serves thousands of Muslim women, would permit its officers to strip a Muslim woman of her religious head covering, which violates her Constitutional rights,” CAIR-LA Civil Rights attorney Dina Chehata said.

The experience inflicted upon Mubarak a degrading indignity she will remember for the rest of her life. (Oh, Boo Hoo, who the hell cares?)