Not to mention, he is also a major funder of terrorist groups in the Islamic world and is widely acknowledged as the chief financier behind the Arab Spring as well as Arab terrorism to destabilize and destroy the state off Israel. Tens of thousands of patriotic citizens have joined forces in a viral campaign calling on President Donald Trump and the Department of Justice to finally take down far-left billionaire George Soros. 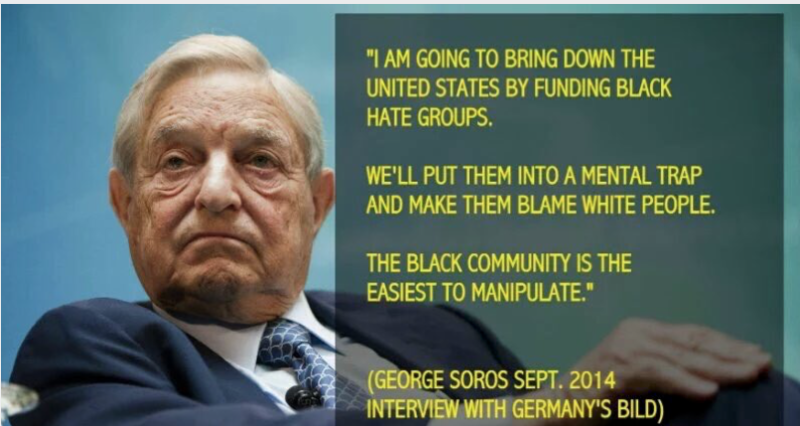 Neonnettle  More than 60,000 people have signed a petition addressed to “President Trump, Attorney General Barr, FBI Director Wray and governors of all 50 states.”

The campaign requests that the president instructs America’s top law enforcement agencies to launch an investigation into “George Soros and his Open Society Foundation.”

It accuses Soros of “funding the radical leftist organizations attempting to violently destabilize our beloved nation.”

“The radical left is now holding the rest of society hostage – violently rioting, attacking police, and scaring away law-abiding citizens from parts of their own cities,” the petition states.

“They are, in fact, cynically using George Floyd’s killing as an excuse to destabilize society and push for a Marxist revolution.”

“We applaud the president’s call to designate ANTIFA as a terrorist organization,” the petition reads.

“We ask that those who fund organizations like ANTIFA and other radical leftist organizations ravaging our beloved American cities be investigated as abetters of terrorism.

“People like George Soros and his Open Society Foundation are masters of ‘dark money’ in politics and progressive causes, and we must not allow people like him to take advantage of our respect for civil society by weaponizing them against society.

“Organizations that call for an end to Judeo-Christian civilization, and which subsequently incite and participate in violent riots should not benefit from the anonymity and tax-exempt status granted to legitimate non-profits.

As Neon Nettle previously reported, Soros recently announced that he is pumping another staggering amount of cash into the radical-left Black Lives Matter organization.

While America burns under the leftist violence and rioting, Hungarian-born financier Soros announced he is donating another $220 million to the “Black Lives Matter movement.”

Much of Soros’ money is going into efforts to defund the police and control 2020 voting systems, his foundation revealed.

“This is the time for urgent and bold action to address racial injustice in America,” Alex Soros, George Soros’ son and deputy chair of the Soros family’s “Open Society Foundations,” said in a statement.

“These investments will empower proven leaders in the black community to reimagine policing, end mass incarceration, and eliminate the barriers to opportunity that have been the source of inequity for too long,” Alex Soros said.

MORE about the Anti-Semitic, America-hating Soros:

GEORGE SOROS’ war against the Jews

Did you know that one-third of European Union officials (and many unnamed American ones) are on the George Soros Open Society payroll?

Apparently, George Soros is in charge of who and how many Muslim economic migrants posing as refugees are being given asylum in Canada