Despite Italy’s socialist Prime Minister Giuseppe Conte’s and the European Union’s efforts to defeat wildly popular Lega Party leader, Matteo Salvini, he vows to fight their kangaroo court charge of “kidnapping” illegal alien Muslim invaders (by not allowing their George Soros-funded NGO human trafficker boat to dock in Italy last year) and will continue fighting for his country and its citizens. 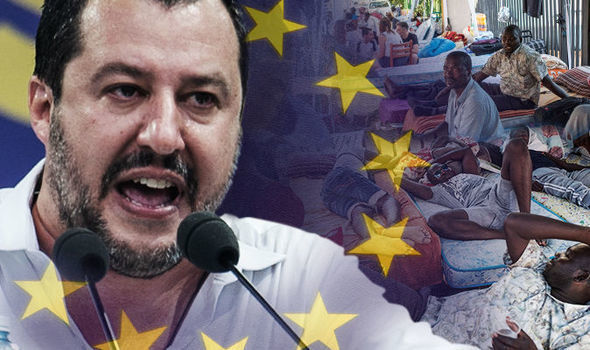 RAIR Foundation In a new video released by Matteo Salvini, he slammed the political trial in which is set to begin on October 3, 2020, for the charge of “kidnapping”, which in reality was preventing 164 potentially dangerous and illegal migrants from disembarking from a Soros-funded NGO ship last year. In August, Left-wing Italian senators voted 149 to 141 in favor of Salvini standing trial for “kidnapping” illegal migrants, making this seem more like a political trial or a witch hunt than a legal matter.

“I will go on trial because I blocked the disembarkation of illegal immigrants into our country”  declared the former Deputy PM, Savini in front of his supporters in Manduria, where he was campaigning for the Lega Party in the regional elections.

Salvini was pushed out of his position in the Conte government on the orders of Angela Merkel, for whom his hardline position on ending illegal Muslim immigration went against everything she stands for. Despite the trial, Salvini remains the most popular politician in Italy and has a good chance of being elected prime minister in the next election.

While in office, Salvini insisted on hard work; support for the police; national sovereignty against the EU; war against illegal immigrants, the main source of crime and instability in Italy. He promised to “close the ports” (which he did) and expel aliens, “cutting the costs of sustaining them and reducing the length of their stay.” “We’ll make sure less money and time is spent on clandestine (illegal) immigrants.”

He wanted the “shameful business” of illegal immigration to become less and less “convenient” to the corrupt  NGOs who illegally trafficked the African Muslim migrant-wannabes to Italy. “I intend my role as a minister as a tutor of safety,” which is just BUONSENSO – the Italian version of common sense. “ He would tweet  “Everyone has the right to love, grow up and build a family in the country where they were born.” This means, of course, that illegal immigrants must go. “Am I wrong?”

HEY, ITALIAN LEFTISTS…this is what you get when you tear down the retaining wall (Matteo Salvini) protecting you from mass Muslim invasion

“WE SHALL RETURN!” Tens of thousands of adoring crowds turn out to see Italy’s populist, anti-Muslim migration leader, Matteo Salvini, who vows to return to power