So, it’s only fair that Israelis turn abandoned mosques on their land into something more useful for them. 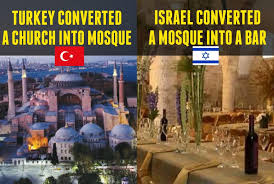 Ignore the narrative on this video from Turkish State Media. The land on which these mosques stood never belonged to the so-called Palestinians, they are all in Israeli territory, which was once called Palestine. But there has NEVER been a nation called Palestine and the only reason these Arabs are called Palestinians is because Yassir Arafat decided to call them that after their defeat by the Israelis in the 1967 Six Day War