Non-Muslim French women in several cities in France have reported being assaulted in the streets by young men in recent weeks, allegedly for wearing skirts. One woman was punched in the face.

BreitbartEarlier this week, a 22-year-old woman in Strasbourg named Elisabeth was the victim of an assault by three young men, with two holding her while the third man punched her in the face and left her with a black eye.

“Look at that whore in a skirt,” said one of the (Muslim) men prior to punching a French woman in the face 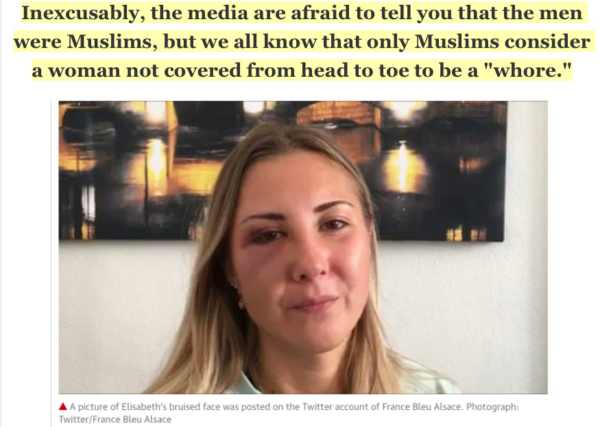 The victim said the men commented on her skirt before the attack, saying: “Look at that whore in a skirt.” Around 15 people witnessed the attack, which took place in broad daylight, but no one was brave enough to intervene, broadcaster France Bleu reports.

While the attack garnered attention from English-speaking media such as the BBC, it was not the only assault on young women to take place in a French city in recent weeks.

Junior interior minister Marlene Schiappa – who is in charge of citizenship and was previously in charge of equality issues – visited the eastern city to discuss the safety of women in public. She told France Bleu Alsace that “the skirt is not responsible for the attack and the woman even less”.

“A woman is never hit because she wears a skirt. A woman is hit because there are people (Muslims) who are misogynistic, sexist, violent, and who free themselves from any law and any rule of civility by striking them.

In the city of Mulhouse, two young women were attacked by an 18-year-old young man on Wednesday. According to the victims, the man accused one of them of wearing shorts that were too short and followed the pair to a tram stop while insulting them.  The man was sentenced to two months in prison.

The teen then slapped one of the girls and pushed her to the ground and grabbed the other girl by the neck before leaving the scene. 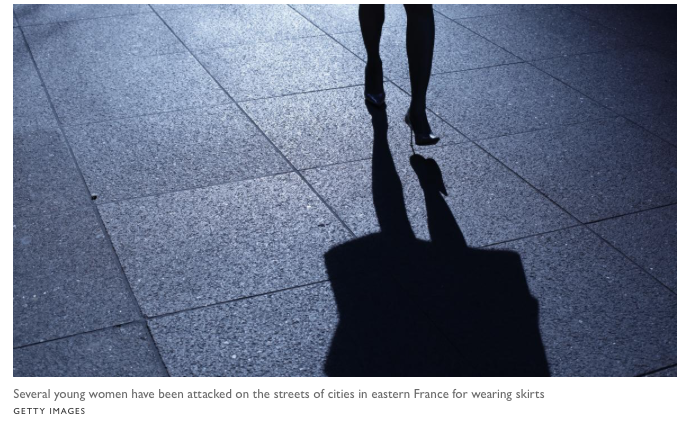 Similar scenes have been described by women living in the city of Rennes, with city councillor Anaïs Jehanno saying: “In 2020, young girls no longer dare to walk around Rennes in miniskirts. Night workers are afraid to go home.”

Deputy Mayor for the security of Rennes Lenaïc Brièro said there had been a surge of violence since the Wuhan coronavirus lockdowns, saying: “In Rennes, but also in Paris, Nantes, Bordeaux, Brest… We have to deal with drug trafficking. And also with the presence of young, desocialised foreigners wandering around.”

In Amiens, women from the city shared their experiences of harassment on social media earlier this month including one video that went viral showing two women being harassed and labelled as “whores” for how they were dressed.