However, forcing them out of Calais will just disperse them to other illegal camps around France. French authorities dismantled the camp of “about 800” fake refugees in the port city of Calais on September 29th. The makeshift camp is thought to be the biggest since the authorities demolished the so-called “Calais Jungle” camp in 2016. 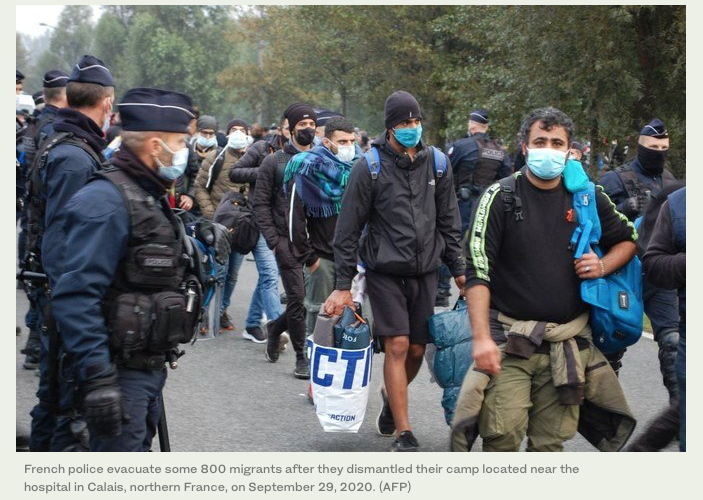 Infomigrants The French interior minister, Gérald Darmanin, tweeted on Tuesday that he was sending his “support” to the Prefecture of the Pas-de-Calais region in north-western France as the authorities there “proceed to dismantle a large migrant camp in the town,” situated near to a hospital.

Darmanin confirmed that “more than 600” of the camp’s former residents were being bused to “welcome centers” ahead of falling temperatures and the onset of winter. He said the authorities’ aim was to spread “humanity and fight smugglers.” (WELCOME camp? How about putting them into a DEPORTATION camp, then actually deporting the economic freeloaders posing as refugees?)

According to the news agency Agence France Presse (AFP), the operation was “the biggest such operation since the sprawling ‘Jungle’ shantytown was broken up four years ago,'” in 2016. However, at its most populated, the “Jungle” was thought to hold “as many as 10,000 invaders posing as refugees” wrote AFP.

Ever since the break-up of the jungle, illegal migrants have continued to make their way to Calais and the surrounding coastline and pitch their tents wherever they can before attempting to make it across the Channel towards the UK either by boat, hidden in cars, lorries or on trains, or some have even tried swimming.

The prefect in Pas-de-Calais, Louis Le Franc told reporters at the scene, “we want to avoid a concentration and a new gathering point in Calais.” He said the gathering of hundreds of tents posed “serious problems of security, health and tranquility,” according to AFP, particularly “for staff and patients of a nearby health center.”

Le Franc said it was important to get the illegal invaders out before “the winter period” and described the conditions they were living in, in a forested area as “extremely difficult.” He said mostly the operation was about providing people with a “safe haven,” and that his forces wanted to halt the “exploitation of human misery.” (So, send them to Saudi Arabia that has 3 million empty air-conditioned tents)

AFP said that the majority of the camp’s residents came from Somalia, Sudan, Iran, Iraq and Eritrea. According to InfoMigrants French, some of the local migrant associations said that many of the men are unaccompanied minors (NO, they aren’t. They just pretend to be under 18 to get preferential treatment), who had either not been recognized as such, or had fallen out of the system.

Left behind after the operation were a collection of “tents, duvets, covers, shoes and clothes abandoned during the evacuation, as well as empty cans, and rubbish,” wrote InfoMigrants French.

Siloé, a member of Utopia 56 a pro-migrant group, told InfoMigrants French that the illegal invaders did not want to board the buses but they “had no choice. Lots of them weren’t even able to pick up their personal belongings, or their administrative documents.” (They have no documents, that’s why they’re squatting at an illegal camp)

This is what the illegal invaders did to the Calais camp when they were evicted in 2016: