Despite the non-stop media coverage of the handful of RINOS endorsing Joe Biden for President, Donald Trump has secured the endorsement of dozens of former senior government officials and military generals spanning decades of Republican administrations. 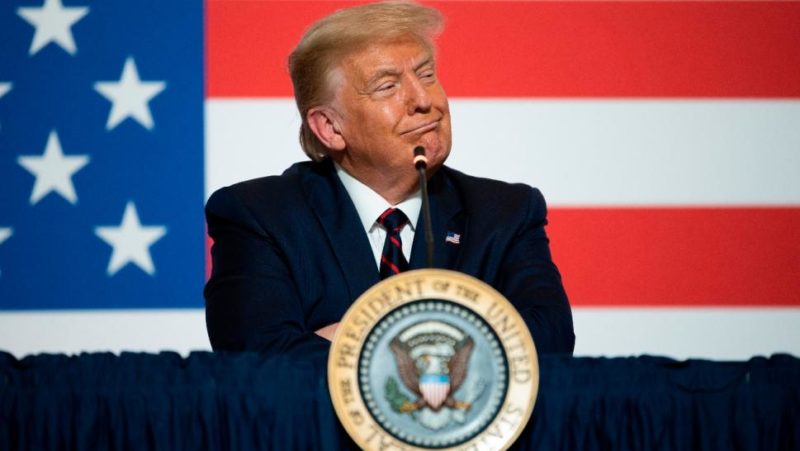 BizPacReciew A group of 70 former officials going back to the administration of President Richard Nixon announced their endorsement of Trump in a letter on Monday, pointing to how he has “brought a badly needed realism” to the nation’s national security policy and prioritized the “prosperity and security of the American people.”

The group of governors, senators, national security advisers, military generals and ambassadors announced their support of the president in an open letter released Monday, citing his pursuit of a “strong foreign and national security policy in America’s interests.”

The former officials from the administrations of George W. Bush, George H.W. Bush, Reagan, Nixon and Ford as well as Trump, cited several of the president’s foreign policy accomplishments including imposing “the toughest sanctions in history against China, Iran, North Korea and Russia.”

The letter also noted Trump’s recent brokering of a peace deal between Israel and the United Arab Emirates, pressing for additional funding from NATO allies and the creation of a U.S. Space Force “while closing the gap in space in the dual threats of Chinese and Russian hypersonic weapons and anti-satellite technology.”

The letter called attention to Trump’s strong stand on Iran and his authorization of the drone strike in January that killed Gen. Qassem Soleimani, Iran’s top security commander and leader of the Islamic Revolutionary Guard Corps. The letter noted that Iran’s “march to a nuclear weapons capability” was “set back significantly” by the president’s actions.

Concluding that a president’s duty and loyalty are owed to the American people, and “not the international community,” and noting “for all these reasons,” the signatories ended the letter saying “we proudly will vote for him.” 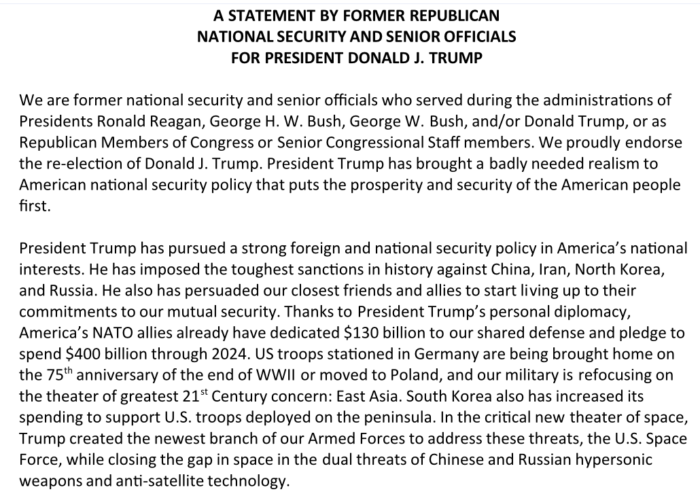 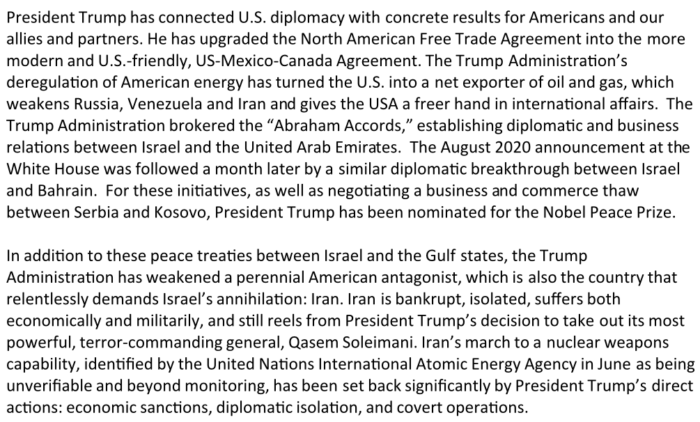 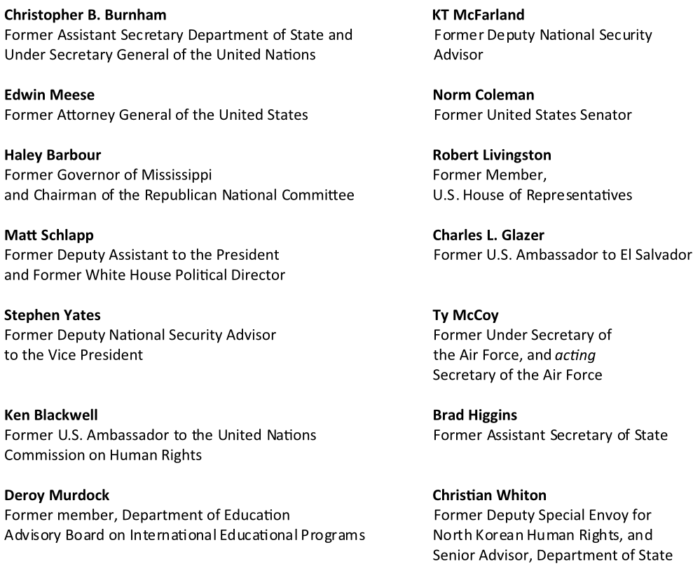 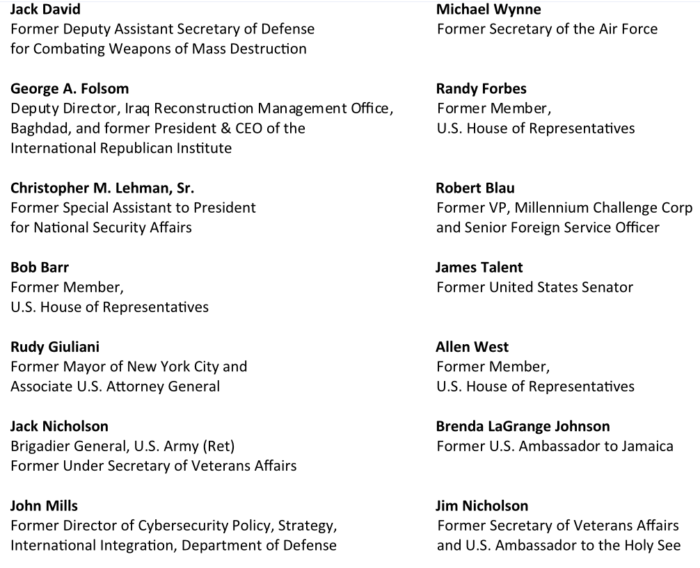 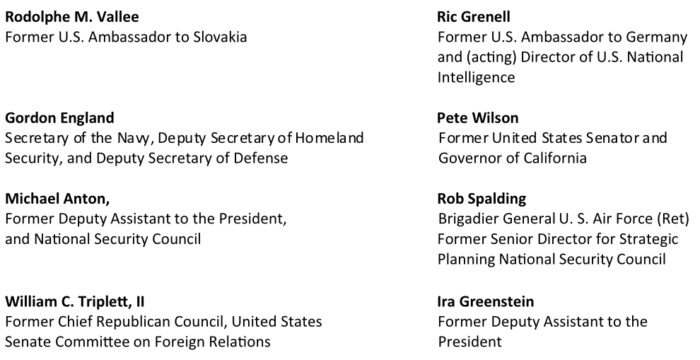 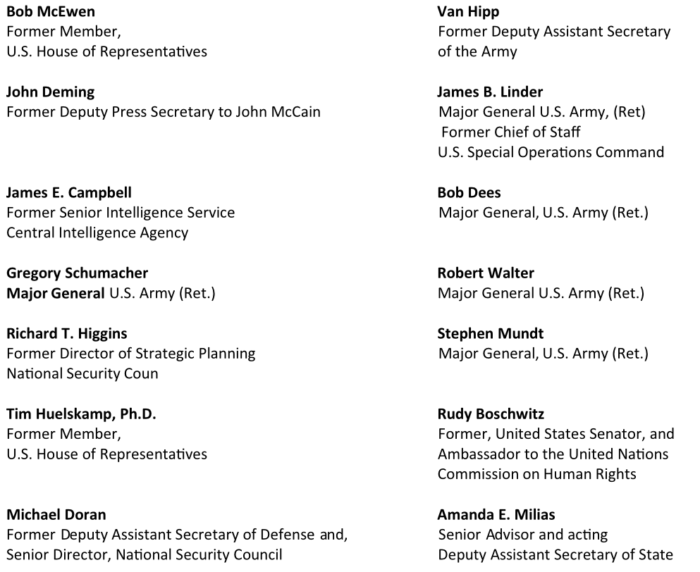 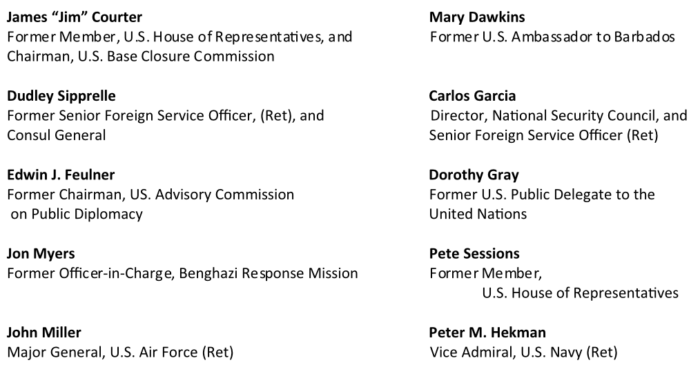