MUSLIM female athlete was disqualified from her high school volleyball match for wearing an Islamic supremacist headbag (aka hijab). 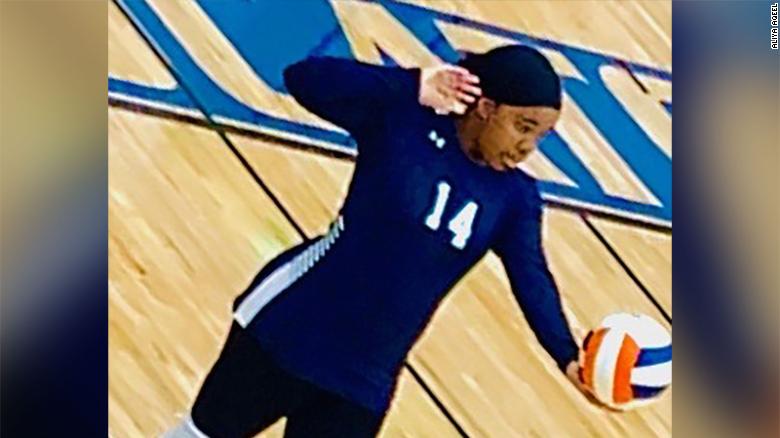 CNN  Najah Aqeel, a freshman at Valor Collegiate Prep in Nashville, was warming up for a match on September 15 when her coach said a referee had refused to let her play due to her headbag.

The referee cited a casebook rule requiring athletes who wear a hijab to be granted authorization from the Tennessee Secondary School Athletic Association (TSSAA). Najah, 14, said she did not have authorization.

Faced with the choice to remove her hijab or sit out the match, Najah decided not to play. Most Muslim women who wear the hijab only remove it in the presence of other women or immediate family members. 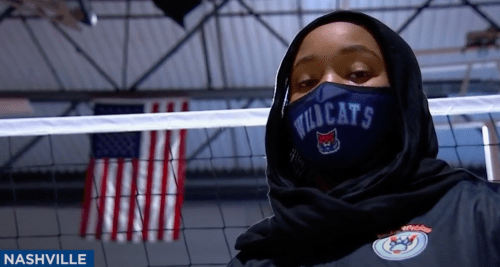 I was angry, sad and also shocked just because I had never heard of the rule before that,” Najah told CNN. “The rule has no business being in the casebook. It singles out hijabis. I don’t see why I need approval to wear my hijab when it is a part of my religion.”

NFSH provides specific guidance on uniforms. “The player must have authorization from the state association to wear the hijab or other types of items for religious reasons as it is otherwise illegal,” according to the NFSH Volleyball Casebook.

Sabina Mohyuddin, executive director of the American Muslim Advisory Council, told CNN she is helping the Aqeel family resolve the matter. She says it’s an issue of Constitutional rights. “Why should Muslim girls, who want to follow their constitutionally protected right, have an extra barrier to fully participate in sports in Tennessee?” Mohyuddin said in a statement.

“This rule was used to humiliate a 14 year old student in front of her peers. It was traumatizing to say the least. We have Muslim girls across the state playing sports. Religious barriers to playing sports should not exist in this day and age. This rule is akin to telling Muslim girls that they need permission to be a Muslim.” (No, they need permission to dress like an oppressed second-class citizen as women are considered in misogynistic Muslim countries.