And you continue to open your borders to more and more of them. Unemployed Muslim invaders (including those who have no intention of ever working) and their multiple wives and herds of children cost the German state over $7 billion annually, according to data obtained from the German Ministry of Labor. 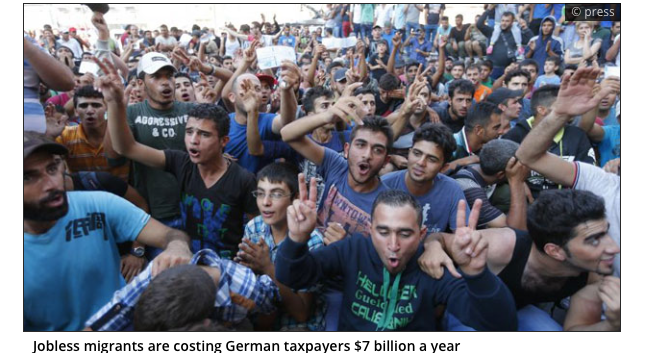 Remix News  The data emerged in a report from Junge Freiheit in response to an information request from Harald Weyel, the Bundestag representative of the Alternative for Germany (AfD) party.

Accordingly, the social costs for unemployed or low-income refugees as well as their family or household members amounted to more than €551 million in May alone. Extrapolated across the year, that would be around €6.6 billion. For Weyel, the figures are further proof that the asylum wave of 2015 and its financial consequences are far from over.

“The federal government tries to disguise the costs of its ‘welcome policy’ in various statistics and budget items. Here, we have very specific figures for what a certain group costs the German taxpayer every month,” he told Junge Freiheit. Weyel explained that more than €six billion are an enormous sum that the “normal wage earner” can hardly imagine.

Weyel said it was incomprehensible for him that the federal government — which recently agreed to accept more migrants from Greece’s Moria Camp even after five Afghans were arrested for  setting their own camp on fire — is bringing more and more migrants to Germany instead of reducing their number through consistent deportations and repatriations.

“Horst Seehofer and Angela Merkel may bask in their self-declared humanity, but it is the German taxpayers who have to pay for it,” Wevel said.

Wevel is not the only one raising concerns, with even members of Merkel’s party also decrying the state’s response to the migrant crisis. This year, German Interior Minister for the state of Saaraland Klaus Bouillon (CDU) said that Germans are growing less tolerant of new arrivals due the record number it receives every year.

“There is great discontent among the population because everyone who arrives here immediately has many or even more rights along with rights to benefits and medical care than someone who has worked here for their entire life,” said Bouillon.

Germany has also paid enormous costs for training, employing and integrating refugees. In 2018, the German government spent a record €23 billion on migrants, including rent subsidies, jobless payments, language lessons, and other benefits. That figure does not account for what individual states spent either, with Hamburg’s government releasing data showing it spent €5.35 billion on asylum seekers between 2015 and the end of 2019.

As Remix News previously reported, the issue of crime, terrorism, and the enormous financial and social costs Merkel’s decision to allow over one million migrants into the country has had a profound affect on Germany in the last five years.

The media did not choose to share a story about the 19-year-old Syrian refugee and ISIS supporter who has cost the German state €5 million and counting with the 24-hour police surveillance he requires in a small German town in the east of the country. The man, who has required a four-person police detail for the last three years to accompany him to the supermarket, still remains in the country despite his court-designated status as a severe terrorist threat.

Although the mass sexual assaults seen in Cologne on New Year’s Eve garnered the most headlines, the issue has not gone away, with similar stories adding up over the years.

The Guardian could have told the individual stories of any migrants or victims involved in the various brutal rapes that have shaken the country, including a case involving ten migrant men convicted for gang raping a German woman or another case involving an Afghan migrant who was accused of raping an 11-year-old girl only to be released by a judge to rape an 13-year-old teenager a month later.

The British paper also did not tell the story of a woman who said she was brutally beaten by a Syrian refugee and left alone with damaging PTSD from what she describes as a life-changing encounter or the elderly German man senselessly beaten into a coma by a Somali refugee only to die alone 11 months later because his family was restricted from visiting him in the hospital due to coronavirus.

Even more unbelievable, a district court in Nürtingen, Germany, confirmed an eviction claim that orders an elderly pensioner couple from Neckartailfingen to move out by the end of the month because the local community wants to accommodate refugees in their apartment, Germans news outlet Wendlingen-Nürtinger Zeitung reported.

The 76-year-old man, who suffered a stroke last year, and his 73-year-old partner have to leave their six-room apartment, which they have been renting for 25 years. According to the court, which confirmed the eviction claim, accommodating refugees is more important than any other hardship.