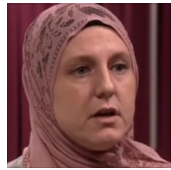 And guess who Chaaban’s lawyer is – Amy V. Doukoure (photo right) – yet another unattractive, overweight convert to Islam working as a staff attorney for designated terrorist group CAIR.

CAIR-Michiganistan In April of 2019, Zainab Chaaban was arrested by City of Detroit Police Officers and transported to Detroit Detention Center and processed into the facility by DDC and MDOC officers. Despite Ms. Chaaban’s repeated and adamant protests, she was forced to remove her hijab to take a booking photo.

While Ms. Chaaban’s photo was taken without her hijab, she was in full view of a male officer that was in an adjoining room that overlooked the area as well as a male janitorial staff member who is believed to have seen Ms. Chaaban without her hijab. (Oh, NOES!) Even more egregious is the fact that Ms. Chaaban was required to wear a copy of her hijabless photo on a wristband which she was forced to present to male and female guards alike as she made her way through the facility for meals and for court. (Oh, NOES! Her hair was seen by some non-Muslim men. How can she ever go on? There are 56 Muslim countries where this wouldn’t be a problem. GO to one of them, bitch. America will never be sharia-compliant)

“Forcing a Muslim woman to remove her hijab in such a public manner where men were present and could see her is not only a violation of Ms. Chaaban’s religious beliefs, it is tantamount to forcing a woman to walk around with completely naked in front of strangers. It is a degrading and traumatizing experience,” said CAIR-MI Staff Attorney, Amy V. Doukoure.