Morocco is a safe country, after all. Oh, that’s right, Morocco won’t allow them to suck the government teat of the welfare system as Europe will. Morroco’s Coastguard said that it intercepted 231 all-male illegal alien Muslim invaders at sea earlier in the week. They were reportedly coming from sub-Saharan Africa.

Infomigrants The Agence France-Presse (AFP) news agency quoted Morocco’s official MAP news agency as saying that the invaders traveling in kayaks and other small boats had been intercepted and taken to safety on Tuesday.

Morocco has become one of the key transit countries for Muslim freeloader wannabes attempting to reach Europe. The country is separated by only 15 kilometers of ocean from Spain in the Strait of Gibraltar. Morocco also envelops the Spanish North African enclaves of Melilla and Ceuta, which have also seen a lot of illegal migration.

The number of illegal invaders  trying to reach Spanish soil from Morocco has been on the rise after a momentary lull during the height of the COVID-19 pandemic earlier in the year, with a recent spike in arrivals on the Canary Islands as well.

Most invaders, however, come to Morocco to travel further east to Algeria, Tunisia and finally to Libya to embark on perilous sea journeys to Europe across the Mediterranean from there. 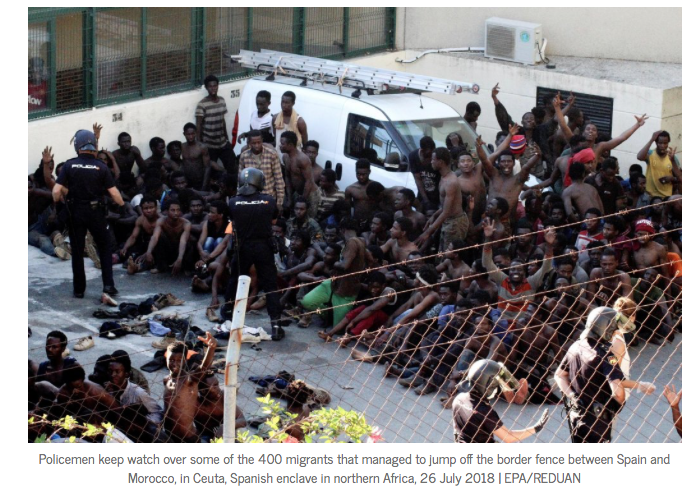 Morocco receives aid money from the EU to stop the Muslim invaders from reaching European soil. It is also known for returning migrants it intercepts back to sub-Saharan countries. NGOs, including Amnesty International, have criticized Morocco’s handling of migrants and refugees, with some accusing the country of violating human rights.

Citing military sources, MAP said the migrants had come from sub-Saharan Africa and were intercepted on Wednesday, September 9 as well on Thursday, September 10. After receiving the “necessary care,” they were brought back to different ports in northern Morocco.

Located in northwestern Africa, the Kingdom of Morocco is a key transit route for migrants from sub-Saharan Africa attempting to reach the European Union, in particular Spain. Migrants often use the Strait of Gibraltar, which at its narrowest point separates Europe from the African continent by only 14 kilometers.

The situation is particularly dire at the Spanish enclaves of Melilla and Ceuta, which share a land border with Morocco on the African continent.