Thousands of pro-illegal Muslim immigration protesters took to the streets of Paris, demanding that the French government give amnesty to the “undocumented” Muslim migrant population just one day after a Chechen Muslim migrant beheaded a school teacher in Paris. 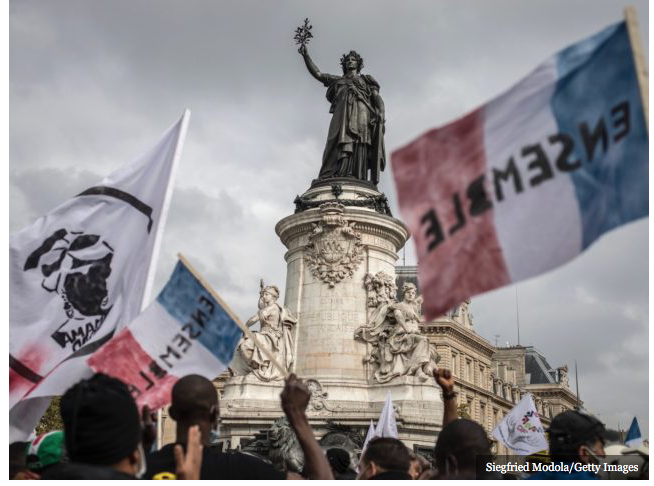 Breitbart (h/t nita) On Saturday, several thousand protesters were seen marching in the French capital — defying the country’s China virus lockdown measures — as a part of the ‘March of Solidarity’ for migrants “without papers” — a left-wing euphemism for illegal aliens.

The organizers of the protest, which included the Federation of Associations of Solidarity with All Immigrants (FASTI), also called on the government to close migrant detention centres and provide “housing for all”, according to Le Figaro.

Thousands of people demonstrated this Saturday, October 17 in Paris during the National March of Sans-Papiers, to demand amnesty for Muslim illegal aliens and to reject en masse the growing xenophobia which affects them in French society. They are supported by many union activists, political organizations and associations. After being refused at the last moment a route to the Élysée, the march was finally held from République to Stalingrad.

In the video below, thousands of illegal aliens marched in Paris on October 17 to demand amnesty. They left from Toulouse, Montpellier, Rennes, Marseille and many other places to reach Paris and the Elysee, with the objective of presenting their grievances to the President of the Republic. They had walked from one end of France to the other for weeks, from big cities to small villages, out of the invisibility to which they are forced.

Despite bans from the Paris prefecture, which prevented them from marching to the presidential palace, they still managed to march in the capital. “It’s the law, it’s Macron, that must be changed,” they chanted as they walked through central Paris.

“I’m 42-years-old, I can’t eat enough every day because I can’t work. Things must change, the government must listen to us,” a Senegalese Muslim illegal alien told the French newspaper.

“I work from time to time in restaurants, construction, cleaning, under aliases (with someone else’s papers),” he admitted, seemingly unafraid of legal repercussions. “But we are really tired, because even during the confinement, who worked? It’s us. And in addition, we are poorly paid,” claimed another illegal migrant.

European Parliament member Leïla Chaibi, of the democratic socialist La France Insoumise party, joined the protest, writing on social media: “This afternoon, I was alongside the undocumented migrants, who marched in numbers in the streets of Paris for equality and dignity.”

“Thousands of people have come to Paris to support this movement of undocumented migrants for their regularization,” Tremblay reported. “Several of them also worked on the front line during the [coronavirus],” he claimed. In September the French government pledged to speed up the pace of naturalization for illegal migrants

The protest in Paris took place one day after a teacher was beheaded by, according to local reports, a Chechen Muslim migrant. 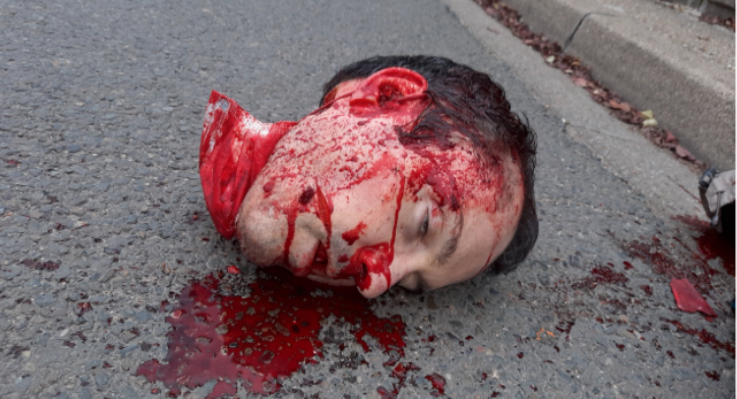 The teacher, Samuel Paty, had reportedly shown his students caricatures of the Islamic prophet Mohammed from the satirical magazine Charlie Hebdo, which sparked a terror attack in 2015.

He showed the cartoon during a class on freedom of speech. This is said to have caused an uproar amongst Muslim parents, despite Paty asking Muslim students to leave if they might feel uncomfortable prior to the lesson.

France’s anti-terrorism prosecutor Jean-François Ricard said that Paty was “assassinated for teaching” and that the beheading was an assault on freedom of expression in France.

“This is the second attack to take place during the Charlie Hebdo trial which shows the high level of terrorist threat we face,” Ricard said.

The 18-year-old Chechen, named as, Abdullakh Anzorov, was shot dead by police following the beheading. He was granted a residency card in March of this year after coming to the country as a refugee.

French President Emmanuel Macron confirmed on Friday that the beheading was “an Islamist terrorist attack” perpetrated against an educator “teaching his students about the freedom of expression”.