Minnesota Democrat Rep. Ilhan Omar hit back at President Trump saying she ‘loves this country’ more than the president does after he accused her of entering the US illegally and of ‘hating’ America, adding his words lead to death threats. (If only!) 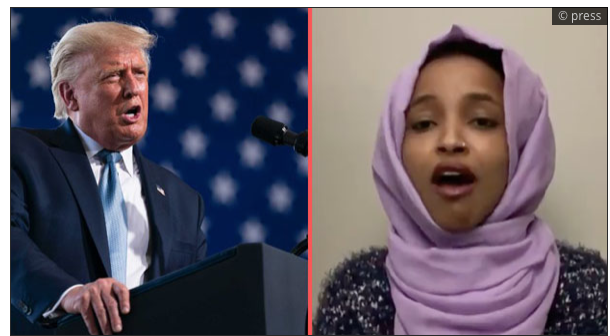 Daily Mail The President denigrated Omar in a speech in Muskegon, Michigan on Saturday. ‘Ilhan Omar, who truly hates our country, but she’s one of the reasons we’re going to win the great state,’ he said.

.@IlhanMN responds to the president’s criticism: “I would certainly reckon…not only Somalis, but myself, the governor of Michigan, our speaker, all love this country way more than the president, who is not only destroying the presidency but everything this country stands for.” pic.twitter.com/kcaiClS4K1

‘Donald Trump’s repeated unhinged conspiratorial attacks on me and other prominent female politicians are not just sexist,’ Omar continued on Twitter. ‘They are leading to frequent threats against our lives. It has to stop,’ she added.

On Saturday she also condemned Trump’s jabs saying: ‘He is unraveling. What you are witnessing is the weakest expression of strength. It’s similar to the final acts of fallen dictators. We will outlast him because our stronger.’