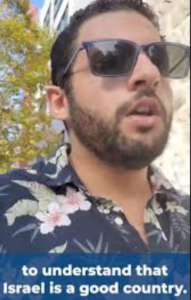 Egyptian-born and raised, Hussein Aboubakr Mansour, who was taught to hate Jews and the state of  Israel, congratulates the Jewish State for achieving peace with three Arab countries.

United with Israel The world is definitely witnessing a new era in the Middle East that benefits everyone in the region. In a moving video, Hussein Aboubakr Mansour congratulates Israel for achieving these peace deals, saying, “You deserve it.”

Hussein grew up in Egypt and was taught to hate Jews and Israel. Today, he recognizes Israel as a “good neighbor” and a “wonderful country,” and he feels certain that the Palestinians will soon join the peace train.

A StandWithUs educator, he proudly supports the Jewish state and fights against anti-Semitism and intolerance.