There was an attack against the Seitenstettengasse synagogue in the Austrian capital of Vienna, Krone reported. The Austrian Foreign Ministry confirmed that it was a terrorist attack. Several shots are said to have been fired near Schwedenplatz area of Vienna. 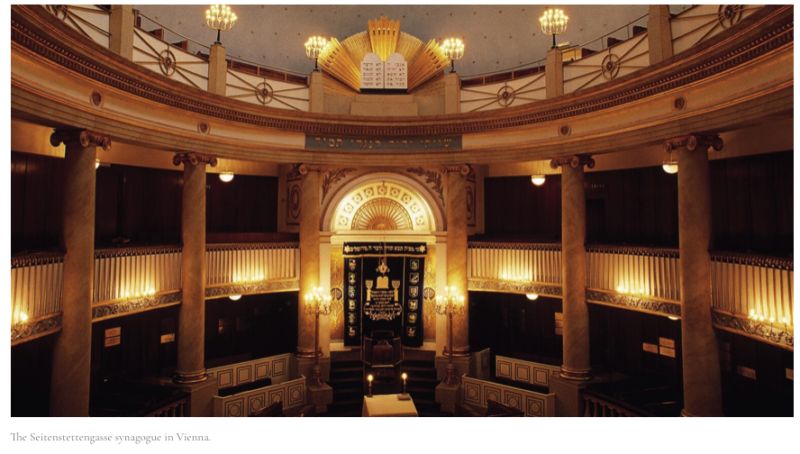 Greek City Times (h/t Mano) Austrian police said that “Currently there is a major police operation in the Inneren Stadt. According to the Interior Ministry, apparently at least one perpetrator was arrested. A police officer is also said to have been shot and seriously injured.

Several shots were fired and one of the perpetrators is said to have blown himself up with an explosive belt. Jewish residents being urged to stay in their homes.

A video is currently circulating on Twitter showing the police in action and gunshots can also be heard.

Other perpetrators are on the run and the police have asked the public to avoid large areas of the area. There are already initial reports that the attack should have resulted in several deaths and numerous injuries.

Shot with an automatic weapon “It sounded like a blast,” said an eyewitness on ORF. “Then you noticed that these were shots. Then you saw a person running down the Seitenstetten (who shot) wildly with an automatic weapon. He then turned down, at the (local) ‘Roter Engel’ from there in the direction of Schwedenplatz. He continued to shoot wildly there. Then the police came and fired. “

Eyewitnesses reported “at least 50 shots”. There were pictures of at least one injured person who was bleeding on the floor in front of a bar 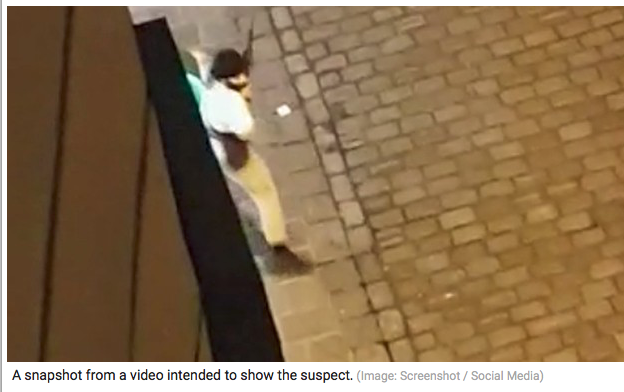 [UPDATE] ‘Seven dead’ and several injured in Austrian terror attack: Police launch huge manhunt for ‘multiple suspects’ as gunman rampages through streets near synagogue and ‘another blows himself up.’ Attacker apparently heard shouting ‘Allahu Akbar’ (Our God is greater than yours) 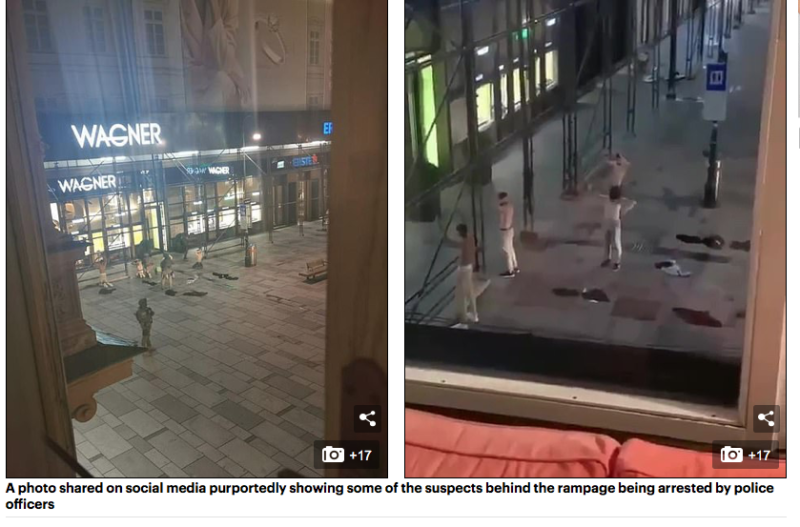 Daily Mail At least seven people are thought to have been killed with several others injured in multiple gun and suspected suicide attacks near a synagogue in Vienna. Austrian police say attacks at 6 different locations, including near synagogue;

A huge manhunt is currently underway for several attackers armed with rifles with police confirming shootings at six different locations, starting near the synagogue at 8pm local time.

One attacker is thought to have ‘blown themselves up’ during the rampage with another arrested and one shot dead by police. A police officer is also thought to have been shot and seriously injured. 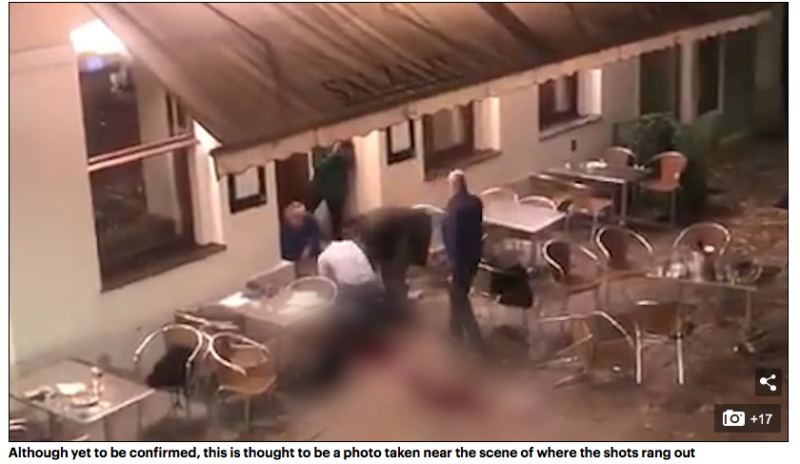 Interior Minister Karl Nehammer told Austrian broadcaster ORF: ‘At the moment I can confirm we believe this is an apparent terror attack.’

He added that the attack was believed to have been carried out by several people and that all six locations were in the immediate vicinity of the street housing the central synagogue.

The rampage comes on the last evening before Austria goes into lockdown, with bars and restaurants in the country closed from midnight tonight. 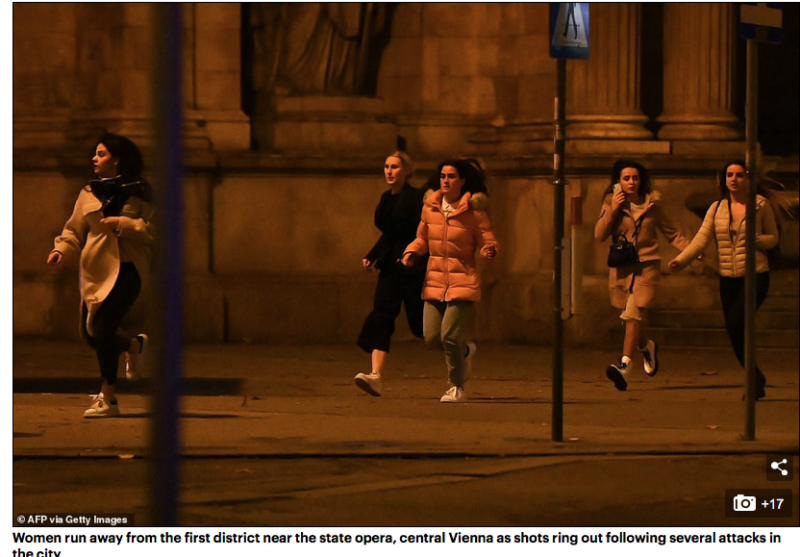 Shocking footage showing a man carrying an assault rifle and sprinting through the streets of Vienna and firing off shots was shared on social media, though it is unclear if he is the gunman behind the attack. More distressing footage appears to show the moment a man is shot by the attacker.

Police urged people to avoid all open spaces and public transport in the city. Police said trams and buses were not stopping and urged social media users not to post videos of the police operation, so as not to endanger officers. 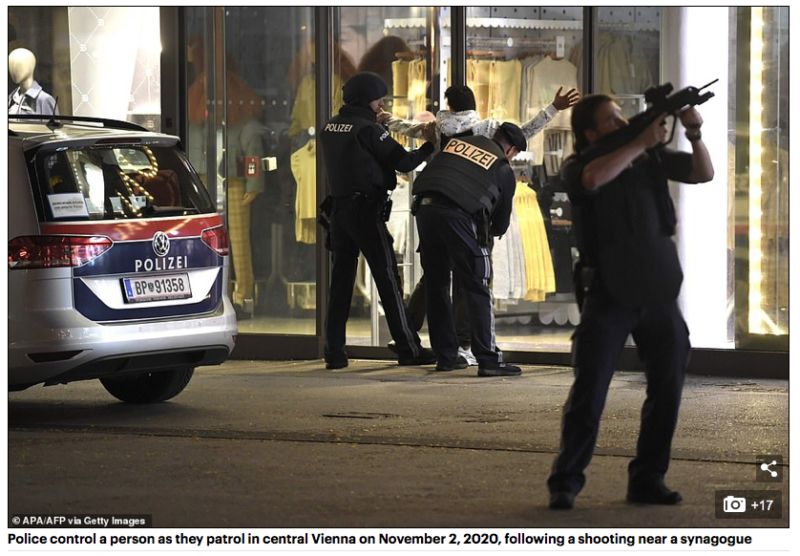 Oskar Deutsch, the head of the Jewish community in Vienna, said the shooting took place in the street where the city’s main synagogue is located but that it wasn’t clear whether the house of worship had been targeted.

The synagogue was already closed at the time of the shooting, Deutsch tweeted. A neighbouring restaurant was also closed. 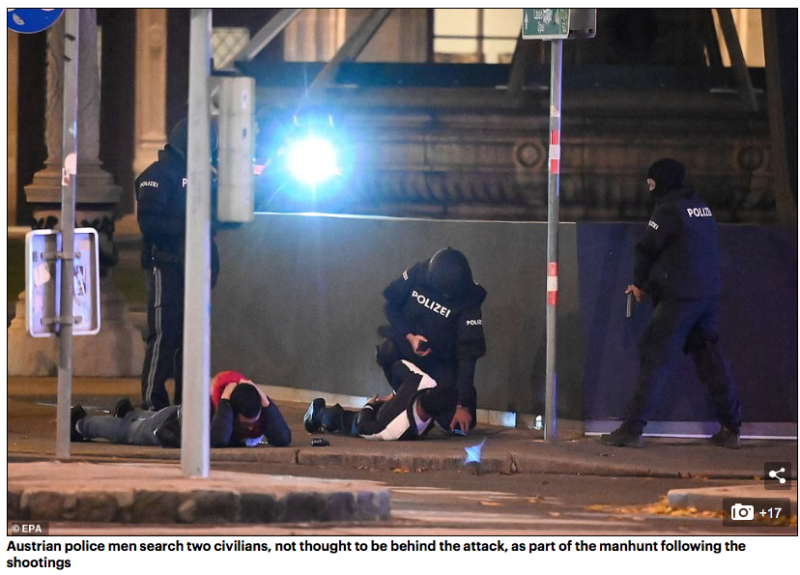 Rabbi Schlomo Hofmeister said he saw at least one person fire shots at people sitting outside bars in the street below his window. ‘They were shooting at least 100 rounds just outside our building,’ Hofmeister said.

‘All these bars have tables outside. This evening is the last evening before the lockdown,’ he added. ‘As of midnight, all bars and restaurants will be closed in Austria for the next month and a lot of people probably wanted to use that evening to be able to go out.’ 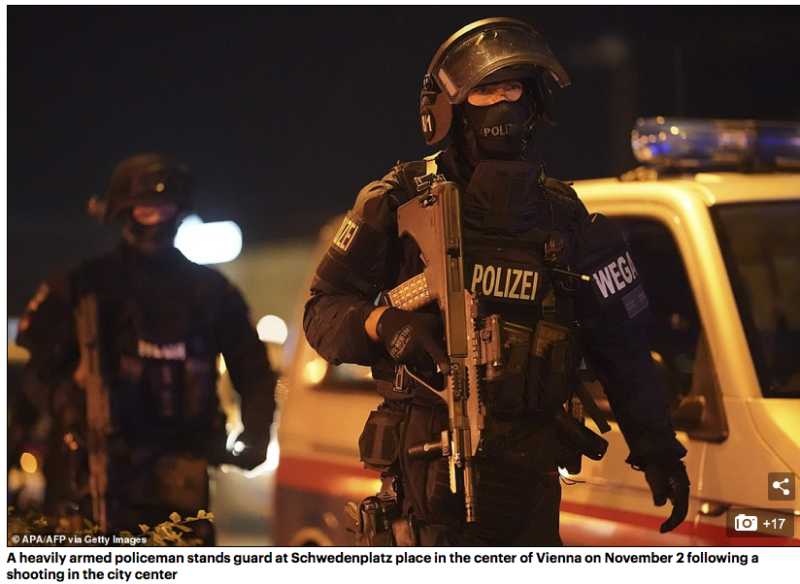 Footage believed to be taken near the scene showed people ducking and weaving as they run for cover, with shots ringing out.

One attacker was ‘dead’ and another ‘on the run’, while one police officer had been seriously injured, Austria’s interior ministry said according to news agency APA

#Vienne Police Believe that there is More than 1 Terrorist pic.twitter.com/NQJoN5usEy

Timeline of terror: How Europe has been decimated by Muslim extremist attacks in recent years:

Oct. 29, 2020 – A knife-wielding Tunisian Muslim man shouting ‘Allahu Akbar’  beheads a woman and kills two other people in a church in the French city of Nice before being shot and taken away by police.

Oct. 16, 2020 – French school teacher Samuel Paty is beheaded in a Paris suburb. Paty had shown his pupils cartoons of the Prophet Mohammad in a class on freedom of expression. Police shot dead the 18-year-old attacker of Chechen Muslim origin.

Nov. 29, 2019 – British police shoot dead a Muslim man wearing a fake suicide vest who stabbed two people to death in London and wounded three more before being wrestled to the ground by bystanders, in what the authorities called a terrorist attack.

April 7, 2018 – A Muslim man drives a van into a group of people sitting outside a restaurant in the old city centre of Muenster in Germany, killing several of them before taking his own life, police say.

March 23, 2018 – A Muslim gunman kills three people in southwestern France after holding up a car, firing on police and taking hostages in a supermarket, screaming ‘Allahu Akbar’. Security forces storm the building and kill him.

Aug. 17, 2017 – A van driven by a Muslim ploughs into crowds in the heart of Barcelona, killing at least 13 people, a regional official says, in what police said they were treating as a terrorist attack.

June 3, 2017 – Three Muslim attackers ram a van into pedestrians on London Bridge then stab revellers in nearby bars, killing eight people and injuring at least 48. Islamic State says its militants are responsible.

May 22, 2017 – A Muslim suicide bomber kills 22 children and adults and wounds 59 at a packed concert hall in the English city of Manchester, as crowds begin to leave a concert by U.S. singer Ariana Grande.

April 7, 2017 – A Muslim truck drives into a crowd on a shopping street and crashes into a department store in central Stockholm, killing five people and wounding 15 in what police call a terrorist attack.

March 22, 2017 – A Muslim attacker stabs a policeman near the British parliament in London after a car ploughs into pedestrians on nearby Westminster Bridge. Six people die, including the assailant and the policeman, and at least 20 are injured in what police call a ‘marauding terrorist attack’.

Dec. 19, 2016 – A truck driven by a Muslim ploughs into a crowded Christmas market in central Berlin, killing 12 people and injuring 48. German Chancellor Angela Merkel says authorities are assuming it was a terrorist attack.

July 26, 2016 – Two Muslim attackers kill a priest with a blade and seriously wound another hostage in a church in northern France before being shot dead by French police. French President Francois Hollande says the two hostage-takers had pledged allegiance to Islamic State.

July 22, 2016 – An 18-year-old German-Iranian Muslim gunman apparently acting alone kills at least nine people in Munich. The teenager had no Islamist ties but was obsessed with mass killings.

July 14, 2016 – A Muslim gunman drives a heavy truck into a crowd celebrating Bastille Day in the French city of Nice, killing 86 people and injuring scores more in an attack claimed by Islamic State. The attacker is identified as a Tunisian-born Frenchman.

March 22, 2016 – Three Islamic State suicide bombers, all Belgian nationals, blow themselves up at Brussels airport and in a metro train in the Belgian capital, killing 32 people. Police find links with attacks in Paris the previous November.

Nov. 13, 2015 – Paris is rocked by multiple, near simultaneous gun-and-bomb attacks on entertainment sites around the city, in which 130 people die and 368 are wounded. Islamic State claims responsibility. Two of the 10 known perpetrators were Belgian citizens and three others were French.