Austrian Chancellor Sebastian Kurz, 34, said he would seek to form a continent-wide alliance against political Islam at the next summit of European Union (EU) leaders later this month and called for an “end to misconceived tolerance” after the deadly Vienna Muslim terror attack in Vienna that  killed 4 and  wounded 22, 7 critically. 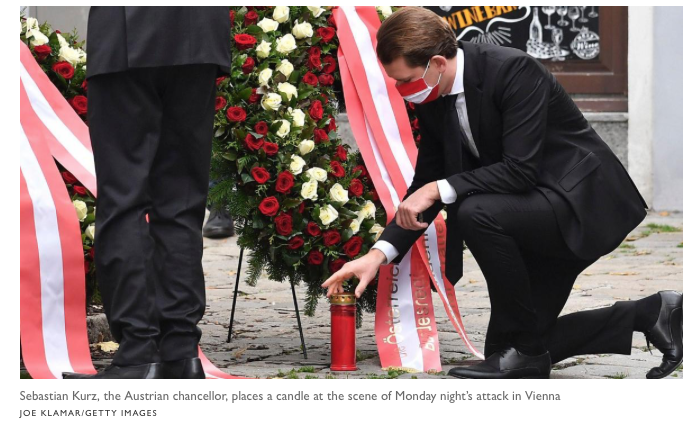 Middle Easst Monitor (h/t Marvin W) The Austrian chancellor told German newspaper Die Welt: “I expect an end to the misconceived tolerance and for all the nations of Europe to finally realise how dangerous the ideology of political Islam is for our freedom and the European way of life.”

“Islamist extremism wants to divide our society. This hatred should not be given space. The enemy are extremists and terrorists, not immigrants. There must be no tolerance of intolerance.”

The SUN The chancellor has been in talks with French President Emmanuel Macron to discuss joint initiatives to tackle terrorism, following the devastating terror killings in Vienna on Monday night and in Paris and Nice last month

Kurz went on to praise Austrian security forces, rescue teams and people who had assisted during the crisis, also thanking international partners, in particular French President Emmanuel Macron, for their support.

“I expect an end to the misconceived tolerance and for all the nations of Europe to finally realise how dangerous the ideology of political Islam is for our freedom and the European way of life,” Kurz told Die Welt, a German newspaper.

“If he had not been released then the terror attack would not have been possible,” Kurz told public broadcaster ORF on Tuesday. 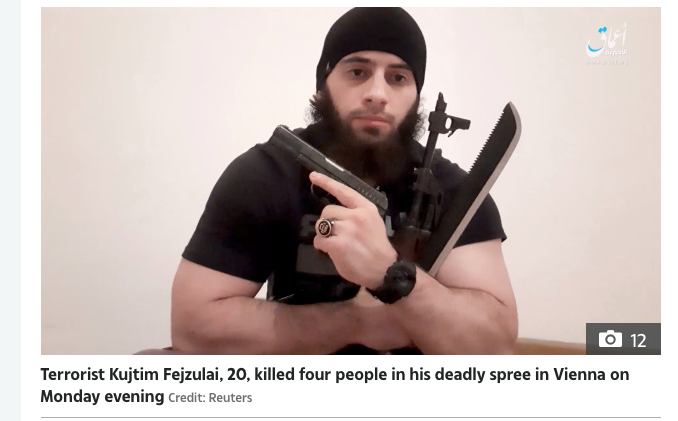 A further failure was revealed by Austria’s Interior Minister Karl Nehammer yesterday, as it emerged that neighbouring Slovakia’s intelligence service had raised the alarm about the attacker in July, when he tried to buy ammunition there.

“Before the terror attack began, according to the information currently available, some things also went wrong,” Nehammer told a news conference, as he called for the formation of an independent commission to examine the errors made.

“In the next steps evidently something went wrong here with communications.” It is also claimed that convicted jihadi Fejzulai had sent videos of the 2015 Charlie Hebdo massacre to suspected accomplices before he launched his own assault on the streets of Vienna. 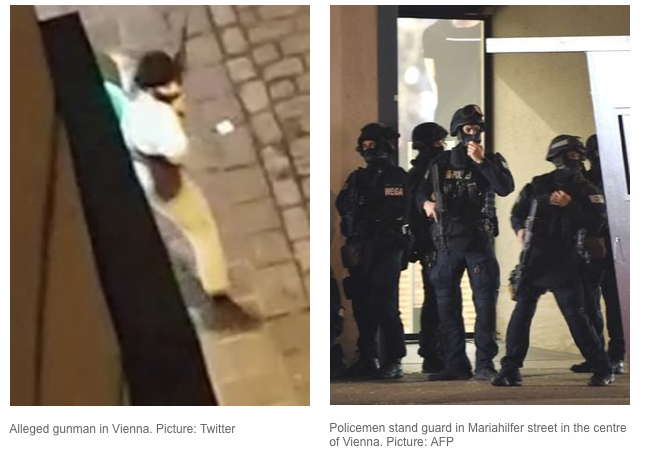 The chancellor’s comments come after it was revealed the Vienna gunman Kujtim Fejzulai, 20, had been jailed in April 2019 after attempting to travel to Syria to join ISIS. The terror killer was granted early release in December under juvenile law. Fejzulai convinced ‘de-radicalisation’ officials he had renounced ISIS and his extremist ideas as part of a parole deal.

Last month, Macron claimed Islam was a “religion in crisis” while he announced plans to implement tougher laws to tackle what he termed “Islamist separatism” in France. The French leader said his government would present a bill in December to strengthen current laws separating religion from education and the public sector.

Macron later insisted that he would make “no concessions” in the drive to reinforce France’s secular society. The French leader also defended Charlie Hebdo’s decision to re-publish cartoons of the Prophet Muhammed, after a teacher was beheaded for showing his pupils the caricatures.

Macron said France would “not give up on our cartoons”. Macron’s comments on Muslims and Islam have inflamed public opinion in recent weeks, sparking protests and widespread calls to boycott French goods in the Middle East.

Foreign Policy“We must never accept that the laws of religion can be superior to those of the Republic.” 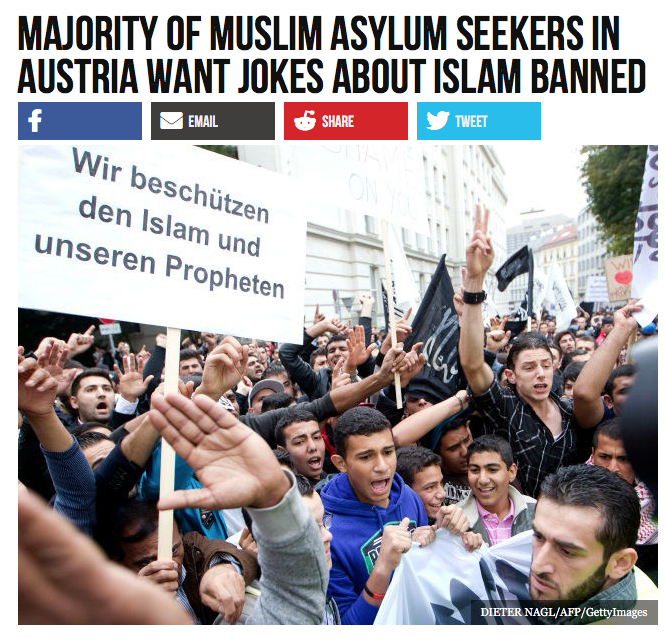 With these words, delivered in a landmark speech in the eastern city of Mulhouse on Feb. 18, French President Emmanuel Macron launched his government’s strategy against political Islam. “Islamist separatism is incompatible with freedom and equality,” he stated, “incompatible with the indivisibility of the Republic and the necessary unity of the nation.”

The Mulhouse speech, and its harsh language, came as no surprise to anybody who has followed the French debate on Islamism over the last few years. Terms such as “Islamic separatism,” “communitarianism,” and “Islamist supremacism”—which in previous years constituted the vocabulary almost exclusively of the National Front (now National Rally, Marine Le Pen’s far-right party)—have become ubiquitous.

Yet now, throughout Europe, the debate over Islamism is taking place with increasing openness and nuance. A 2018 report by the security services of North Rhine-Westphalia, Germany’s most populous state, encapsulated these new debates by arguing that “in the long run, the threat posed by legalistic Islamism to the liberal democratic system is greater than that of jihadism … They aspire to an Islamic extremist order, but are prepared to allow certain democratic elements within that framework. For this reason, their extremism is often barely recognizable at first glance.” 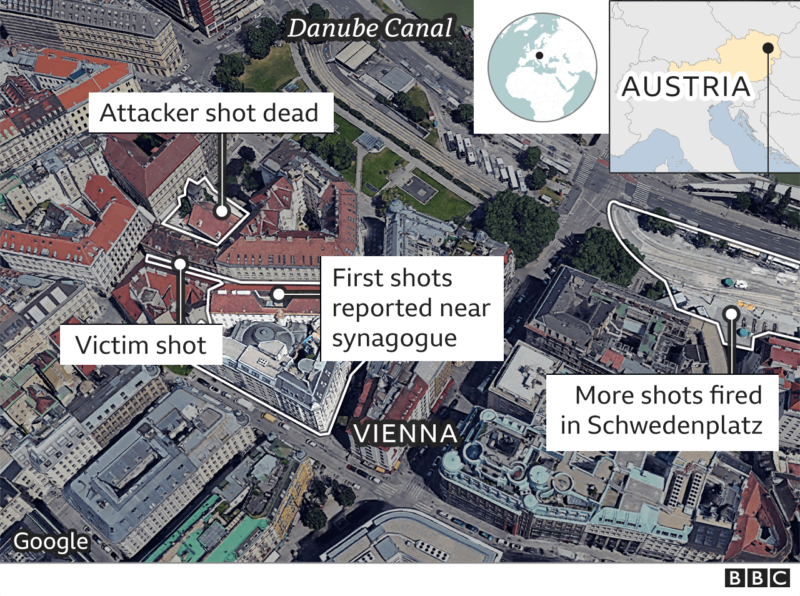 Meanwhile, German Chancellor Angela Merkel said she felt countering “Islamist terrorism” was a fight shared by the European community in the wake of Monday’s attack in Vienna. Merkel tweeted: “We Germans stand in sympathy and solidarity with our Austrian friends. The fight against Islamist terrorism is our common struggle.”

The chancellor’s comments come after it was revealed the Vienna gunman Kujtim Fejzulai, 20, had been jailed in April 2019 after attempting to travel to Syria to join ISIS.

The terror killer was granted early release in December under juvenile law. Fejzulai convinced ‘de-radicalisation’ officials he had renounced ISIS and his extremist ideas as part of a parole deal.

That decision was proved misjudged on Monday evening when the cold-blooded terrorist went on a rampage through the Austrian capital, armed with an assault rifle, a handgun and a machete, killing four people in his deadly wake.

So what does Al-Jazeera think about a European war on Islam?