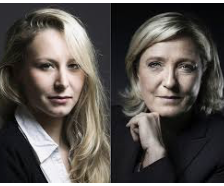 Renowned anti-Islamization crusader and leader of the National Rally Party, Marine Le Pen has a niece, Marion Maréchal-Le Pen, who, at age 22, became the the youngest-ever MP in the French Parliament, and has the same kind of take-no-prisoners determination when it comes to the fight against Islamic domination of her country.

She says President Macron “must untie our hands, must free us from the stifling rulings of the EU Court of Human Rights which blocks every action against the spread of Islamic extremism. We are shackled by EU immigration and asylum policies which prevent us from deporting Muslim terrorists and force us to accept massive and unassimilated Muslim immigration which turns these parallel societies into terrorist recruiting grounds.”