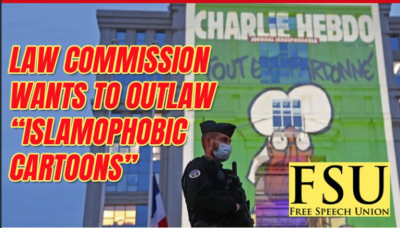 The Law Commission has published a 533-page consultation on reforming “hate crime and hate speech laws”. The new bill it wants to bring before the House of Commons is, according to the Free Speech Union, “tantamount to an Anti-Free Speech Bill which is an all-out attack on freedom of expression”. Andrew Tettenborn, Professor of Law at Swansea University, describes the Commission’s proposals as “the Scottish Hate Crime Bill on steroids.”

Order – Order The commission suggests that “inflammatory cartoons” should not be covered by our right to free speech. The Commission writes: “Several recent incidents involving inflammatory images create grounds for concern… These include Islamophobic cartoons…”

The Commission is concerned that, as the law stands, a person who sent another person an “inflammatory cartoon” can only be prosecuted under section 127(1) of the Communications Act 2003. 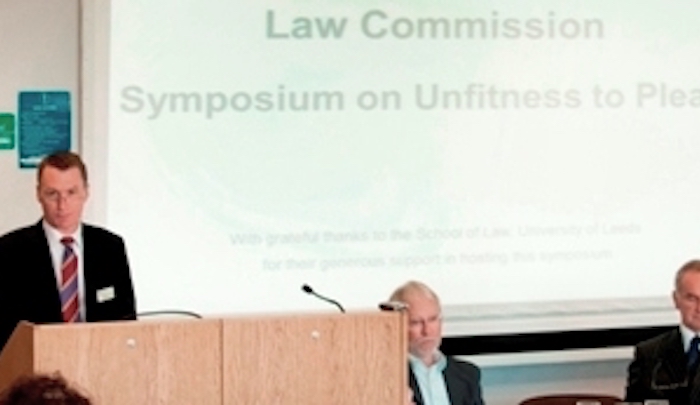 It then goes on to complain: “However, this does not carry the same gravity or labelling as the stirring up offences. It does not reflect the fundamental harm involved, which is not that it is offensive, but that it incites hatred. ” As Macron stands up to the Islamists’ terror, the Law Commission wants to surrender to their agenda.

The Free Speech Union has produced a briefing worth reading before making your views known via the Law Commission consultation here. Lawyers in Britain increasingly see themselves as social justice warriors…

Freedom of expression is the linchpin of a democratic society, but the Law Commission suggests it is merely one among “[other] rights” and should not necessarily take priority when “setting parameters for acceptable conduct”. What are those parameters? The Commission suggests that “inflammatory cartoons” should not be covered by our right to free speech.

The Commission refers to various cartoons in the Consultation, but it is clear that its plans include the cartoons that were published in Charlie Hebdo and resulted in 12 people being murdered in a terrorist attack. The Com- mission calls Mohammed cartoons “infamous” and suggests that “the British media were right not to publish them.”

The Law Commission says that the offence of “stirring up hatred” under the Public Order Act 1986 should be ex- tended beyond written material, which would mean that people who publish “inflammatory images”, i.e. newspa- per and magazine editors, could face up to seven years in jail.

If the law of England and Wales was changed in this way – and publishing “offensive” cartoons became a hate crime – that would represent an extraordinary victory for terrorism.

2. The Commission will effectively scrap the need to show ‘intent’

Currently, a conviction for “stirring up hatred” usually requires the court to show intent – that the accused inten- ded to stir up hatred. The Commission wants to make it easier for the court to secure a conviction. If its plans be- come law, it won’t matter how your tweet or cartoon was meant. A court could simply decide it was “likely” to stir up hatred (or when there was an intention this need not have involved any threatening, abusive or insulting words at all), which will be enough to secure a criminal conviction, meaning up to seven years in jail.

3. The Law Commission wants many more characteristics to be “protected”

The law already outlines five “protected characteristics” (race, religion, sexual orientation, disability, and trans- gender identity), whereby a “hate crime” is committed when offences are “motivated by hostility” or the offender “demonstrates hostility” to a person or group who has any of these characteristics.

The Commission suggests special legal protection for non-religious philosophical beliefs like humanism. No be- lief system should be “protected” from robust intellectual challenge, but to protect a philosophy rooted in the En- lightenment idea of rational and limitless enquiry would be laughable.

5. The plans are an attack on equality before the law

The Law Commission wants victims of crime to be treated differently depending on whether they’re a member of a “protected” group, which is at odds with the principle of equality before the law. The Commission approvingly quotes a Critical Race Theorist who says: “The hostility demonstrated towards certain groups is more blame- worthy… hatred of specified groups causes a different type of harm to society than that of the underlying offence.”

The Commission says: “The whole point of hate-crime law… is to educate the public”. Criminalising misogyny, it says, would remind people that “negative attitudes towards women are not acceptable”. But the law does not exist to control people’s thoughts and our opinions are no business of the state. As one writer put it: “The [consulta- tion] drips with contempt for the British public: we are either hateful and in need of re-education, or pathetic and in need of protection.”

7. The Law Commission’s plan for reducing hate crime will have the opposite effect

In 2012, the “Cross-Government Hate Crime Programme” tried to use “positive images” to “change attitudes”. Clearly, this didn’t work or the Law Commission wouldn’t feel the need to do more. It is demanding that a new “Hate Crime Commissioner” be created to promote even more re-education programmes (or, in the Commis- sion’s words, to “challenge prejudicial attitudes”).

But there is no evidence that these sorts of campaigns, or criminalising “hate speech”, leads to less of it. In fact, the Law Commission implies that the result of ever more laws against “hate crimes” has been an increase in the very problem these laws are designed to tackle.

8. There is already too much surveillance of speech. The Law Commission wants even more

The Commission claims there are “barriers to reporting” hate crimes, like “lack of trust in law enforcement agencies. Infact, police forces have already established“portals”to make it easier for people to report their fellow citizens for speech-crimes without ever visiting a police station – one of the reason they find themselves investigating an average of 66 reports a day that turn out not to be hate crimes and have to be re-classified as “non-crime hate incidents”.

9. The Law Commission proposes to sideline the Attorney General

At present, if the Crown Prosecution Service wants to prosecute someone for stirring up hatred it needs the con- sent of the Attorney General. This stays the hand of over-zealous prosecutors who want to haul people into the courts for expressing ideas they disapprove of.

The Commission wants to do away with this safeguard.

10. The Law Commission wants people to be prosecuted for conversations at the dinner table or in the bedroom

Hate speech laws do not currently cover what you say in the privacy of your own home – there is a “dwelling ex- emption”. The Commission wants to scrap this. If you use words “likely” to “stir up hatred” against a vast array of “protected” groups at the dinner table – again, without intending to – you will be liable for prosecution and could end up being jailed for seven years.

Is this what the Law Commission wants? To set children against parents, husbands and against wives, all in the name of boosting social cohesion?

In the Soviet Union, surveillance like this made parents fear their own children.