Virulent anti-Semite, Ilhan Omar, is worried that such agreements between Israel and several Arab nations would pose a threat to her favorite state sponsor of terrorism – Iran. 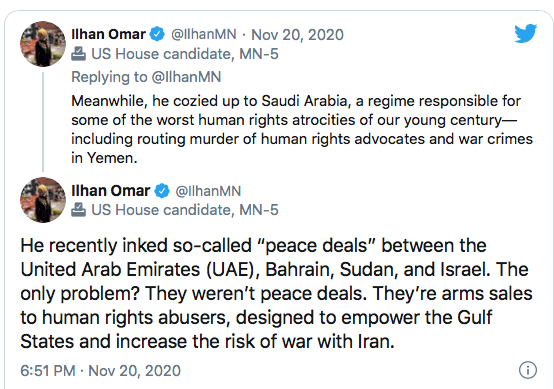 (The Gulf States are targets of the Iranian regime, which is why they need a strong military and economic (Israel) ally in the area)

The representative’s flurry of tweets came after The Nation published an article in which she criticized Trump for collaborating with the United Arab Emirates (UAE).  Omar also argued that “Nearly every action taken under President Trump has made armed conflict more instead of less likely.” (Crap)

She wrote: “Trump imposed crippling sanction after crippling sanction on state sponsor of terrorism Iran —depriving them of much-needed medical supplies during a pandemic and further tightening the brutal authoritarian regime’s grip on power.

This makes no sense. Sanctions are economic warfare.

They have already caused medical shortages and countless deaths in Iran.

You cannot claim to want deescalation and then announce new sanctions with no clear goal. This is not a measured response! https://t.co/sGWtwXuNDT

He ordered the assassination of an Iranian terrorist commander—risking all-out war—earlier this year. (Yet Trump is the only president in recent times that did not get us involved in another war) 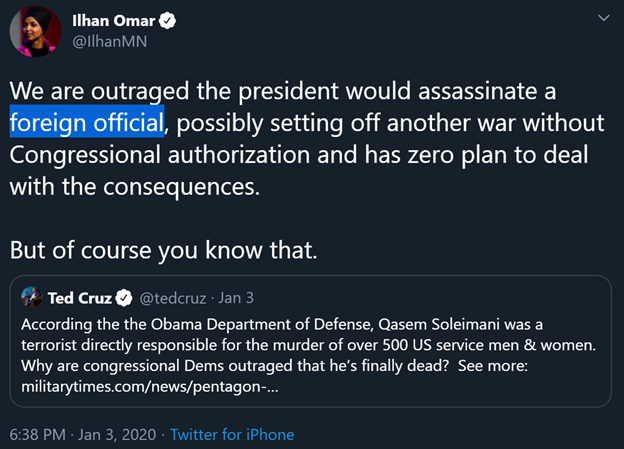 In her op-ed, she suggested that Biden should reverse the peace deals that the Trump administration brokered between Israel and Bahrain, the UAE, and Sudan. “Instead of siding with one group of dictators over another, we should position ourselves at an equal distance from both, allowing ourselves to be honest brokers, protecting our national security and interests while promoting human rights and democracy,” she wrote. “We can hold Iran accountable for its human rights violations while also holding Saudi Arabia, Yemen, and the UAE accountable.”

As stated previously, Omar is one of the few on the left who have dared to go after President Trump for his foreign policy. The reason why is obvious, isn’t it? The president’s foreign policy was far superior to that of his predecessors, both Democrats and Republicans.

His success in creating a peace agreement between Israel and Sudan is the most noteworthy given the fact that the two nations have actually engaged in military conflicts against one another. Moreover, Sudan vowed never to open diplomatic relations with the Jewish state until the Palestinians were allowed to form their own nation. It has also allowed for Israeli travel to countries where the country’s residents would normally be prohibited.

Perhaps this is the real reason why Omar doesn’t approve of Trump’s foreign policy. The president has been very friendly to Israel and has bolstered the relationship between our two nations. The lawmaker, who has a history of making anti-Semitic comments, likely resents the fact that these agreements benefit the Jewish state.

Moreover, it seems clear that like her colleagues on other issues, Omar’s objection to Trump’s foreign policy is based more on partisan politics than anything else. Not only did Trump pave the way for even more peace deals for Israel, he has not started any new wars in the Middle East or anywhere else.

The notion that persuading more nations to recognize Israel is not a positive development is patently absurd on every level. 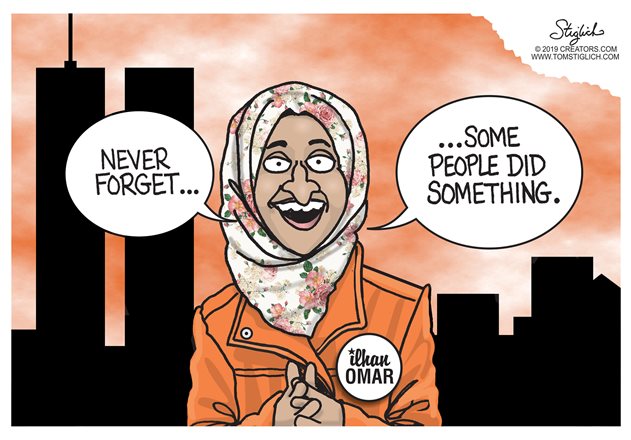