The UAE has stopped issuing new visas to citizens of 13 mostly Muslim-majority countries including Turkey, Pakistan and Iran, over unspecified ‘security concerns.’ More than likely, these 13 Muslim nations have voiced their outrage against the UAE because of its peace agreement with the state of Israel. 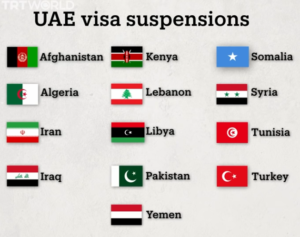