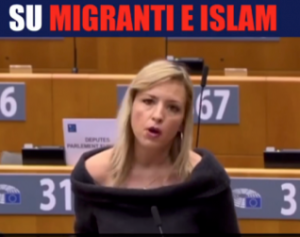 During her powerful speech, Sardone calls out the EU’s hypocrisy for brought charges against former Deputy Prime Minister Matteo Salvini who halted illegal Muslim migration instead of those aiding and abetting the flood of unvetted strangers pouring into Italy.

RAIR Foundation On the immigration side, you take it out on those who defend the borders, security, and national sovereignty, for example, Matteo Salvini,” Sardone admonishes, “But not one word of condemnation against human traffickers, against those who favor illegal immigration, against those NGOs who systematically violate national laws!”

“You talk of a European Union that has helplessly watched the spread of racism, Islamophobic sentiments, hostility and intolerance toward Muslims,” Sardone exclaims on the Parliament floor, “But you say nothing — I say nothing — about terrorism, about the victims of attacks, about those who hate us Europeans, and our way of life, our culture, and our values.”