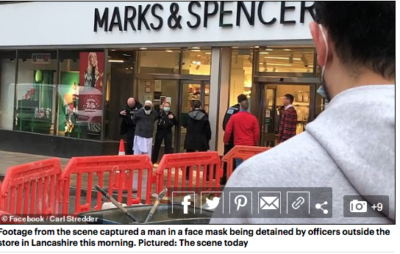 Anti-terrorism police were called in after a Muslim man stabbed an employee and shopper at a Marks & Spencer department store. Officers said the stabbing was NOT being treated as a terrorist incident, even though counter-terrorism detectives were leading the investigation due to comments at the scene. “We would kindly ask that you don’t speculate about the motivation behind the incident.” (Like DUH!) 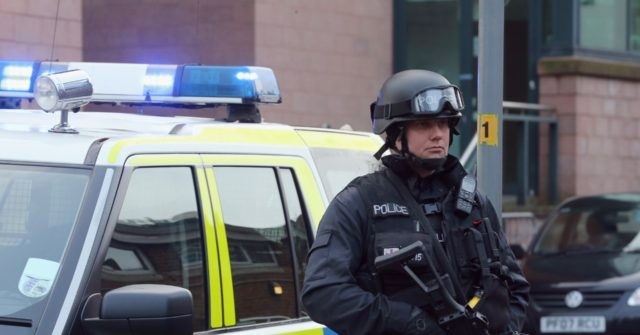 Daily Mail A 57-year-old Muslim man was arrested on suspicion of attempted murder following the attack in Burnley at around 9.30am and remains in custody, Lancashire Police said.  The two women, a Marks & Spencer employee in her 40s and a shopper in her 60s, were rushed to hospital with serious knife injuries which are not thought to be life threatening.

A force spokesperson also praised members of the public who detained the suspect at the scene for their ‘brave actions’.  The knife attack came as shoppers flocked back to the High Street after the national coronavirus lockdown was lifted and all shops reopened on ‘Wild Wednesday.’

Footage from the scene captured a man in a face mask and Muslim attire being detained by officers outside the Marks & Spencer store this morning. Witnesses claimed one of the women was stabbed in the neck during the attack, but this has not yet been confirmed. 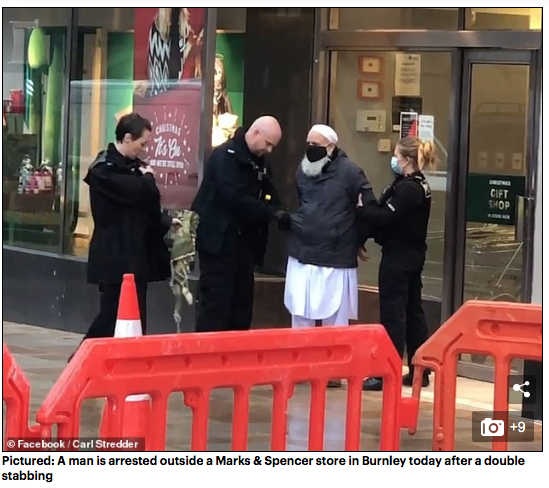 Lancashire Police said a knife was recovered from the scene following what is believed to be an ‘isolated incident.’ (In other words, we don’t think he had ties to any major Muslim terrorist group)

Superintendent Stasia Osiowy, of Lancashire Police, today thanked passersby who ‘acted very quickly this morning in order to detain the attacker’. She added: ‘Without their brave actions this incident, while serious, could have been so much worse.

‘At this time we are keeping an open mind as to motivation but what I can say is that we are considering the mental health background of the man we have arrested.’(Oh, here we go. The “mental issues” excuse when any Muslim is involved)

An M&S spokesperson said: ‘We are incredibly grateful for the emergency services that responded to this incident and our M&S colleague and the member of the public who were injured are now in good care.  ‘We are also supporting the police with their investigation. The store is currently closed and our focus is on ensuring that our colleagues in Burnley receive all the support they need.’