Following the assassination of Iran’s top nuclear scientist, a video and pictures of an Israeli flag and a banner reading “thank you Mossad” went viral on social Media after they were hung on a bridge over a busy thoroughfare in the Iranian capital of Tehran. 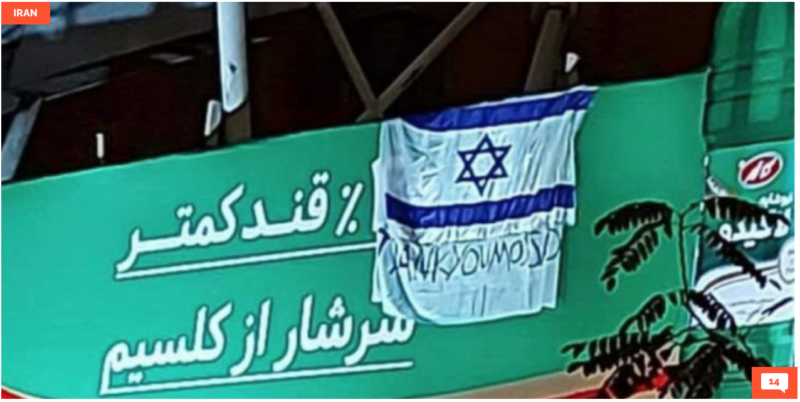 WINThe flag and banner were spotted Monday evening on what appears to be a pedestrian bridge over a six-lane major road in Tehran’s Pars neighborhood, where scores of cars stopped in busy traffic would have noticed the flag and the English language banner below it.

An unusual incidence was reported in the Iranian capital, #Tehran overnight Monday. An Israeli flag was hung from a road bridge atop a sign reading, “Thank you, Mossad” likely in response to the assassination of nuclear scientist Mohsen Fakhrizadeh.https://t.co/sAzKgHkyR9

Video clips and pictures of the flag and banner were widely circulated on social media following reports that unknown individuals had hung the flag and banner across a bridge over a boulevard, partially covering a billboard for a low-sugar and calcium-rich drink.

“A finger in the eye,” tweeted Israeli journalist Ronen Bergman, who authored a book on the history of the Mossad, Israel’s spy agency that Iranian leaders blame for the assassination two weeks ago of their top nuclear scientist.

“Someone in Iran is trying to take advantage of the momentum of the assassination of [Mohsen] Fakhrizadeh … in the heart of Tehran,” Bergman said.

The Israeli flag is a banned in Iran except for its use in government organized anti-Israel demonstrations where the flag is burned or trampled on while crowds loyal to the Islamic Republic chant “death to Israel.”

Although Israel has not commented officially on the assassination, it is widely believed to have had a hand in the killing. Iranian officials claim it was carried out by a satellite-controlled machine gunusing advanced artificial intelligence that shot several bullets into Fakhrizadeh.

The bridge incident is not the first time the Israeli flag has been used by Iranians in an act of defiance against the totalitarian government. In January, a video circulated online showing Iranian university students defiantly walking around giant Israeli and American flags that were painted on the ground, in order not to step on them.

ALSO SEE: Iranian Dissidents: With a Trump Loss, ‘Now Our Hope Is Gone’