Palestinians slam Jews for celebrating Jewish history at the tomb of Abraham, Isaac and Jacob. Imam Mahmoud al-Habbash, the Palestinian Authority’s highest Islamic authority, condemned the placing of a menorah in Hebron as a “sacrilege and a desecration of the holy site.” 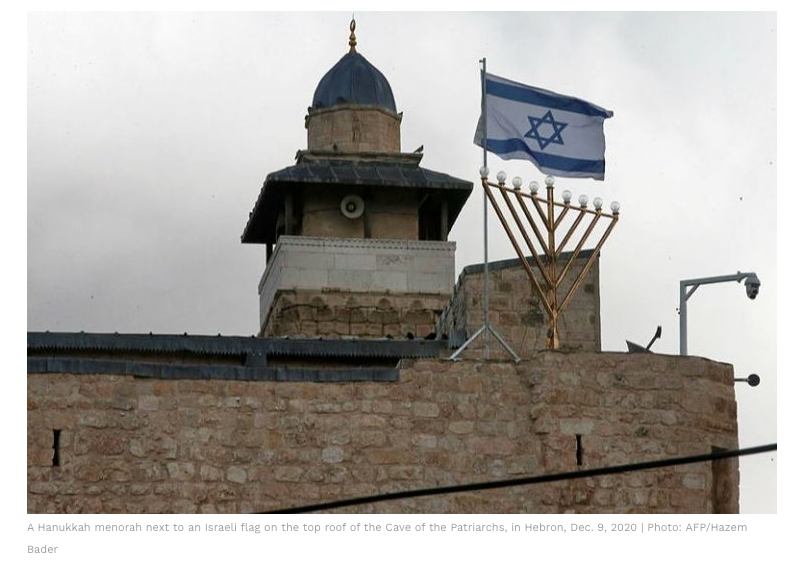 UnitedwithIsrael In yet another move to incite hatred against Israel and try to negate Jewish history, the Palestinian Authority is calling the traditional Chanukah candelabra on the roof of the Tomb of the Patriarchs holy site in Hebron a “war crime,” Palestinian Media Watch (PMW) said Monday.

Before the Jewish holiday even began, the PA’s Supreme Fatwa Council condemned the Chanukah candelabra as a “provocation” and an attempt to “erase Islamic history” while creating “a fake Jewish character” for the site, reported PMW, which monitors and translates Palestinian media from Arabic into English.

And so, Jews celebrating Jewish festivals at the Cave of the Patriarchs (Judaism’s second holiest site after the Temple Mount) becomes a diabolical colonialist scheme by foreign invaders to usurp a “Muslim” holy site, and thus a “war crime.” 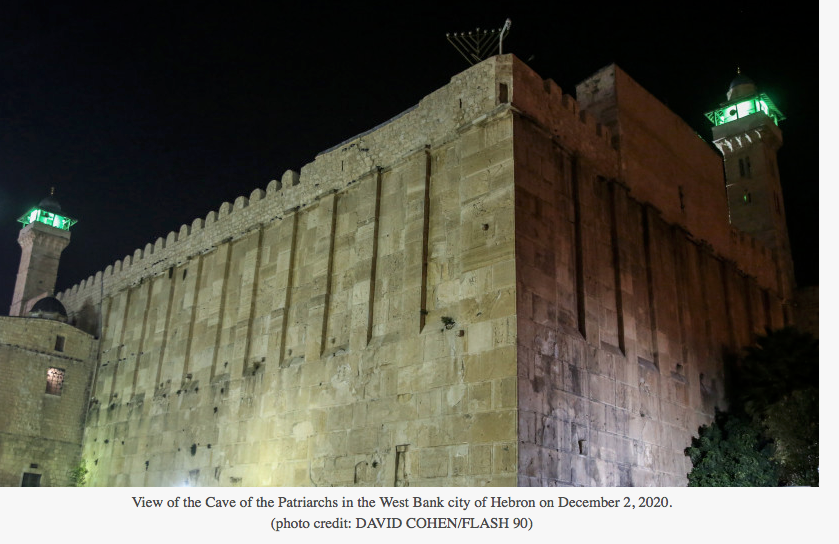 In a news article in the PA’s official daily newspaper Al-Hayat Al-Jadida, the Palestinian Supreme Fatwa Council called the candelabra “a blatant violation, a true provocation of the Muslims’ sensibilities, and an additional aggressive attempt to erase the Islamic history in service of the goal to Judaize the Ibrahimi Mosque and create a fake Jewish character for it.”

The Tomb of the Patriarchs is revered by both Jews and Muslims as the burial place of the biblical patriarchs Abraham, Isaac, Jacob, Sarah, Rivka and Leah, with the matriarch Rachel buried in Bethlehem.

After Israel captured Judea and Samaria in the Six-Day War, the site has been maintained with access for both religions. However, the Palestinians have waged a years-long propaganda war attempting to alter reality, claiming that the site has no connection to Jews, despite the fact that it existed as Jewish pilgrimage site for over a thousand years before Islam even existed.

The Palestinians recently attacked Israel for making the site disability-accessible with wheelchair ramps for visitors of all religions, calling it an attempt to “invade” Hebron and “Judaize” the site.

For several years, the Palestinians waged an ugly delegitimization campaign at the United Nations Educational, Scientific and Cultural Organization, demanding UNESCO declare the Tomb of the Patriarchs as a Palestinian World Heritage site.