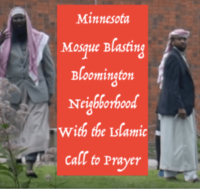 No one dares complain lest they be labeled a ‘racist’ or ‘Islamophobe.’ Another major issue is traffic/parking/noise code violations by members of the Dar-Al-Farooq mosque, who fill the neighborhood streets with their cars on a regular basis. Yet the City of Bloomington is refusing to do anything about it.

Four Somali Muslim members of the Dar-Al-farooq were indicted in Minnesota for islamic terrorism, the same mosque that gave us the radical Muslim member of Congress, Ilhan Omar and Keith Ellison, who is now Attorney General of Minnesota. And now you know why the traffic, parking, and noise violations associated with this mosque are being ignored by law enforcement. And people wonder why this mosque got bombed a few years ago.