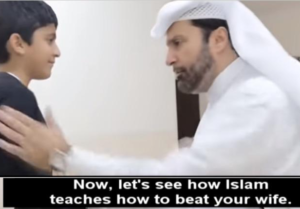 Qatari sociologist Abd Al-Aziz Al-Khazraj Al-Ansari uploaded a video in which he gave a demonstration and explanation about how to beat your wife in an Islamically permissible fashion. He said that it is not necessary to beat one’s wife frequently, but that a man – as the leader of the house – must sometimes exercise his authority and discipline his wife “out of love” so that “life can move on.

Al-Ansari said that punching your wife or striking her in the face is prohibited and explained that it is in some women’s nature to like domineering, authoritative, violent, and powerful husbands.

Apparently, some Muslim men have a different interpretation: