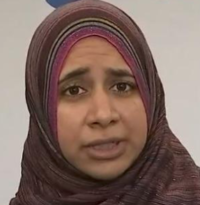 Mrs. Potatohead, Zahra Billoo (right) of CAIR-San Francisco is very upset that the Government is getting personal information about potential Muslim security threats using an Islamic prayer application. Well, after all, everyone knows that Muslims like to pray right before staging terrorist attacks in America. Not to worry, Zahra, the U.S. Government has many different and better ways of tracking Muslim terrorists and their supporters like you.