Residents of Puy-de-Dôme, France, are being asked by the local government to welcome military aged, illegal alien  Muslim invaders posing as ‘unaccompanied foreign minors’ into their homes due to overloaded asylum accommodations.

Infowars The department council has asked volunteers to join the SESAME project, which oversees placement and care for migrant minors. Accommodation systems in the area are so overwhelmed, some young migrants are staying in hotels, the council says.

Private residences are now being sought for foreign minors.

“The family, couple or single, with or without children, active or retired, welcomes a young person at their home, either as a supportive foster family – for a full-time reception of a young person for a period of 6 months to 1 year, renewable until reaching adulthood, or as a relay family – for occasional reception of one or more young people during the holidays and certain weekends,” the SESAME project website explains.

“Welcoming a foreign minor is a civic and solidarity commitment which makes it possible to provide a family, reassuring, stabilizing and fulfilling environment for the young person,” the description continues. “The family is committed to sharing family life with the young person, thus contributing to their social, educational and cultural integration in our territory.”

Then there’s this from Breitbart: 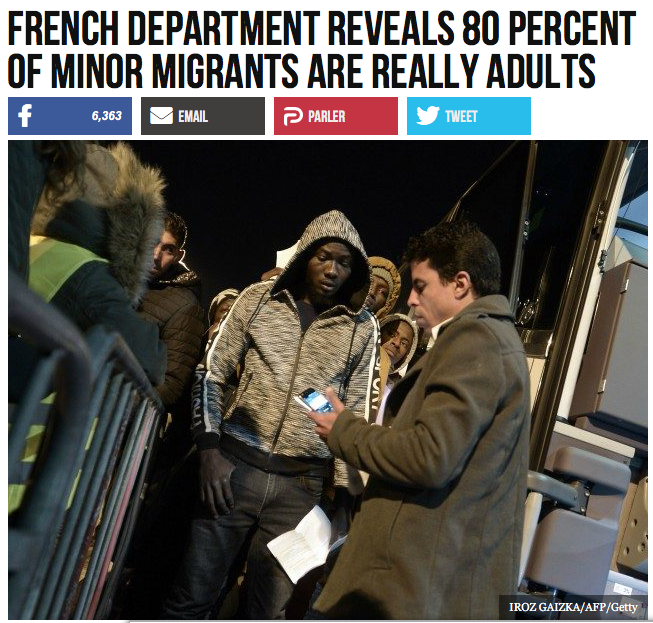 The French department of Côte-d’Or has revealed that of the over 500 migrants claiming to be minors who arrived at the department in 2019, just 20 per cent of them were actually underage.

The department, which contains the city of Dijon, stated that it received 523 foreigners who claimed to be minors in 2019 and that examinations revealed that only around a hundred were the age they claimed to be, Le Bien Public reports.

Many Arab and African Muslim adult males in their mid-20s (as seen in the photo above) pretend to be minors or “children” after conveniently losing their passports proving their age or country of origin to increase their chance of asylum in the West.

Authorities are powerless as the burden of proof absurdly lies on them. In some cases, 29 year old men were registered as “children”, costing the taxpayers thousands of Euros each month to babysit. These “children” often have nothing better to do than roam the streets of European cities in gangs of up to 20, robbing people, harassing women and engaging in street fights.

France had had problems with migrants attempting to falsely claim to be underage to receive preferential treatment for years with police even busting a network of migrants, primarily from the Ivory Coast, who helped create fake documents to fool French authorities in 2018 and cost taxpayers a million euros.

Last year, a migrant attempted to claim to police in the commune of Angoulême in south-west France that he was 16 years old until officers conducted a background check that showed the man, who claimed to be from Mali, was actually 47 after his fingerprints were connected to a passport he had used to enter Spain.

Figures released by the Assembly of French Departments (ADF) in September revealed the cost of unaccompanied minor migrants to the French taxpayer, stating that the French pay two billion euros a year for the estimated 41,000 minors currently living in France, with each migrant costing the state 50,000 euros.

According to the ADF, around half of the migrants tested on their age turn out to be adults.

Earlier this year in Angoulême in south-west France, a migrant attempted to claim that he was 17 years old but when authorities connected his fingerprints to a passport he had previously used, they found he was actually 47.

Last year in April, police in Montpellier busted a network of migrants who were using forged documents to claim they were underage. Authorities traced the fake documents to a civil servant in the Ivory Coast who was then arrested.