“Every child is born a Muslim,” claims Islamic hate preacher Zakir Naik, who further says that every child, irrespective of the child being born in Hindu, Christian or even a Jewish family is born as a Muslim. “He submits his will to Allah.”

OpIndia Naik claims that Prophet Muhammad said that every child is born in the innate religion. “Every child is born as a Muslim. He submits to Allah. Later on, the elders, the parents, the teachers, they influence the child. He may remain on straight path or he may become a fire worshipper, he may become an idol worshipper and then he may go out of the fold of Islam.” 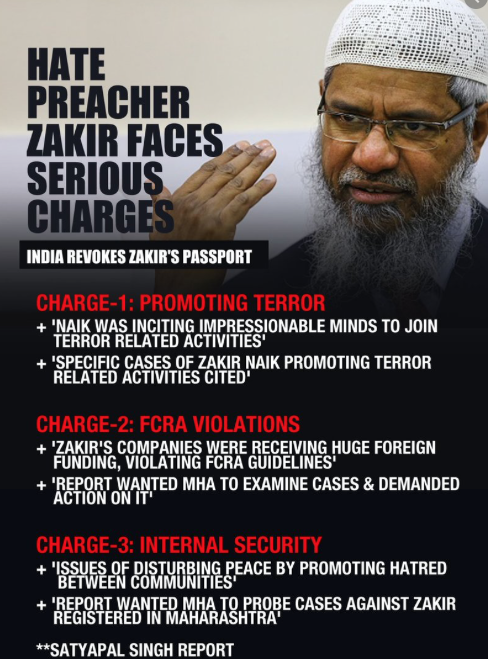 The NIA (National Investigation Agency) of India submitted its charge-sheet against televangelist Dr Zakir Naik, in connection with a case filed against him for allegedly inciting youngsters to take up terror activities. The NIA, in the 58 page charge-sheet, has declared the Salafist preacher an absconder and booked him for inciting communal hatred. The 51-year-old televangelist, who left the country in July last year, is being probed under terror and money-laundering charges by the NIA.

He has been charged under sections 295-a (Deliberate and malicious acts, intended to outrage reli­gious feelings of any class by insulting its religion or reli­gious beliefs), 298 (uttering, words, etc., with deliberate intent to wound the religious feelings of any person) and 505-b (with intent to cause, or which is likely to cause, fear or alarm to the public, or to any section of the public whereby any person may be induced to commit an offence against the State or against the public tranquility) of the Indian Penal Code.